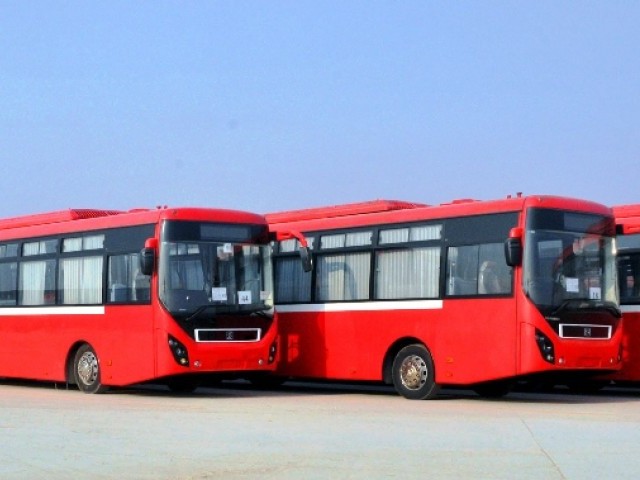 According to the Punjab government, the project cost Rs30 billion. The figure, however, is disputed by the opposition. PHOTO: EXPRESS/ ZAHOORUL HAQ.

The routes and stations were decorated with fresh flowers and posters representing Pakistani culture. Lahoris danced to drums celebrating the new service introduced by the Punjab government.

For one month, the Metro Bus will offer services free of cost to the people of Lahore.

A high-level Turkish delegation, led by the Turkish Deputy Prime Minister participated in the inaugural ceremony.

Shahbaz, speaking at the event, said that it was a “great” day in the history of Pakistan.

Shahbaz said that the buses will save time and money by taking 150 people, who were earlier travelling in 100 cars, in one vehicle. “This will also save fuel and time… and avoid traffic jams.”

He vowed that the investment done in the project will be returned to the people in four and a half years.

Special guests at the event, including the Punjab chief minister and the PML-N chief, travelled in the bus during the inauguration event.

As soon as the bus service was opened for the public, a large number of people rushed towards the bus stops. Police resorted to baton-charge to disperse the crowd.

On February 5, last year the ground had broken for the project. Work on the 27-kilometre long project – from Gajju Matta to Shahdara – started on March 12.

According to the Punjab government, the project cost Rs30 billion. The figure, however, is disputed by the opposition.

The project is currently missing a bridge over River Ravi as a result of which the buses will use the existing Ravi Bridge.

Lahore Transport Company Chairman Khawaja Ahmad Hasan expects 20,000-40,000 people to use the service which he says has the capacity to cater to 112,000 people every day.