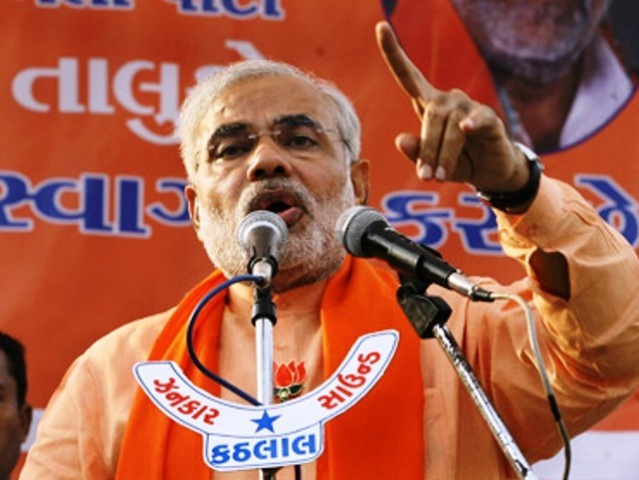 Modi, a Bharatiya Janata Party (BJP) leader from Gujarat, is widely seen as pushing to be his party's candidate.PHOTO: AFP/FILE

Modi, a Bharatiya Janata Party (BJP) leader from the state of Gujarat which was tarnished by religious riots on his watch in 2002, is widely seen as pushing to be his party’s candidate.

Yashwant Sinha, who held the finance and foreign portfolios during the BJP’s national five-year rule until 2004, gave his vote of approval a day after Modi met the party’s newly-elected president Rajnath Singh behind closed doors.

“Wherever I have visited, ordinary people as well as party workers have expressed the demand that the BJP should put up Modi as its prime ministerial candidate,” Sinha told reporters.

“I too have come to the conclusion that if the BJP makes Modi its official candidate for the post, then the party will greatly benefit,” he said.

The BJP – the main opposition party in parliament – is scouting around for a vote-winning candidate to take on the ruling Congress party, which has been weakened by slowing economic growth and corruption scandals.

Gandhi, the scion of the Gandhi political dynasty, is widely expected to lead Congress into the polls after being elevated to the post of party vice-president earlier this month.

Modi came to power in 2001 in Gujarat. The following year, the western Indian state was rocked by some of India’s worst religious riots since independence in 1947.

Some 2,000 people were killed in clashes between Hindus and Muslims, most of them Muslims.

One of Modi’s former ministers was jailed for life for instigating the killing, but all investigations have cleared Modi of personal responsibility.