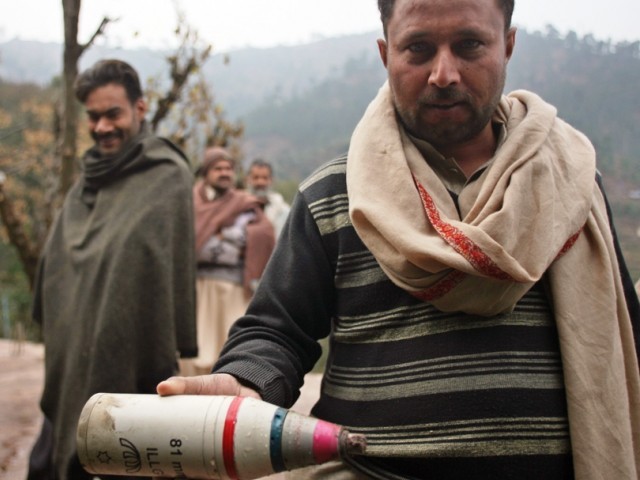 A villager in Kashmir poses with a mortar shell casing claimed to have hit a home at the village of Parla Mohrra. PHOTO: AFP

KASHMIR: On both sides of the de facto border in Kashmir, villagers living on one of the world’s most dangerous flashpoints have special reason to fear the return of tension between India and Pakistan.

The Line of Control that separates Kashmir has been subject to a ceasefire agreed by the nuclear-armed neighbours since 2003, offering a semblance of security to the hamlets that dot the snow-capped, mountainous terrain.

Periodic violations and cross-border shelling are a constant menace, but a sharp escalation over the last 10 days following apparent tit-for-tat killings of soldiers by both sides has heightened a sense of dread of more conflict.

In the tiny settlement of Parla Mohrra, located in Kashmir and home to around 25 families, local families who eke out an existence on their farms are frightened.

The hamlet scattered over the hills appeared deserted when AFP visited on Thursday. Nearby shops and schools were also closed as anxious residents refused to venture out of their homes.

Shameer Begum, a 55-year-old widow with 11 children, showed damage to her house and parts of a mortar shell which she said landed in her courtyard on Tuesday night, jolting her out of bed.

“We were so scared and started to pray. We can’t live here if the firing carries on. But I’m a widow and I don’t have the means to move,” she said.

The settlement lies just 450 metres from the de facto border and an Indian army post can be seen across a deep valley perched on the brow of the hill in the distance.

The spike in cross-border firing in Kashmir – a region claimed wholly by both India and Pakistan – has seen five soldiers killed in recent days and threatened to unravel a fragile peace process that had begun to make progress.

Shameer, her shawl wrapped tightly around her head and chest against the biting cold, said the timing of mortar rounds and firing was impossible to predict as she pointed to bullet holes scarring the wall of a neighbour’s home.

“The children haven’t been to school for three days as schools are closed. I don’t even let them go outside,” she told AFP.

Labourer Sardar Shahmim, 45, said men were taking on jobs traditionally done by their wives to spare them from venturing outside.

“We’re not sending our women to fetch water. We go ourselves now,” he told AFP.

“We have enough food for today, but if the firing incidents carry on, our food will run out,” he said.

A deal to “de-escalate” tensions and end the cross-border firing was reached during a 10-minute phone call on Wednesday between generals from both sides, which appears to have ended hostilities for the time being.

Across the border, in Indian Kashmir’s Abdulian village, security forces are on high alert, conducting patrols through the night and cleaning out old bunkers used by villagers for protection during earlier outbreaks of violence.

As locals cautiously carry on tending to their cattle and sheep in Abdulian, where the soldiers deployed nearly outnumber the local population, a sense of anxiety is palpable.

The hamlet, which is ringed by barbed-wire fences, has witnessed sporadic firing since the 2003 ceasefire, pushing villagers to ask the government to resettle them in safer areas.

In Charunda hamlet, where three villagers were killed by cross-border shelling last October, residents say their nerves are shredded by the prospect of an escalated conflict.

Nazir Ahmad, whose son suffered severe injuries due to firing in 2011, told the Deccan Herald newspaper he was praying for normality to return.

“We fear that we will face the worst situation again if the ceasefire breaks. We take shelter in the ground floor of our house or bunkers due to the fear of shelling,” he said.

Farmers in India’s remote and mountainous Poonch district, bounded on three sides by the Line of Control, said they feared a return to life before the ceasefire, when they were compelled to move home constantly to escape frequent mortar fire.

In the recent border flare-up, Pakistan says three of its soldiers have been killed in firing by Indian troops since January 6.

India in turn has accused Pakistani troops of killing two of its soldiers on January 8, one of whom was beheaded.

India and Pakistan have fought two of their three wars since independence over Kashmir.

US only supports democratic government in Pakistan: Olson