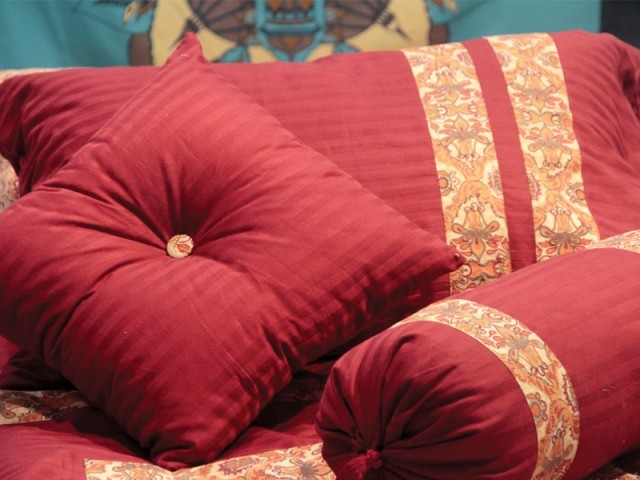 Student Fatima Rizvi drew inspiration for her final year thesis from the birds of Sindh (below) while Syeda Qurat-ul-Ain used the royal heritage and embroidery of the province in her collection (above). PHOTO: COURTESY PUBLICITY

KARACHI: Sindh was the theme of the day at the display of the final year thesis by students of the Asian Institute of Fashion Design, Iqra University on Wednesday.

Students from the 2012-2013 batch of the textile department are set to graduate this year and the thesis display was their final step towards the completion of their course.

“They have explored different themes from their own country and other cities. We encourage cultural diversity which is evident in their work,” said Ahmer Abbas, the programme coordinator of the AIFD textile department, while talking to The Express Tribune. “Students are also getting involved with the local craftsmen and that is why their work appeals to a larger audience.”

Most students, however, drew inspiration from Sindh and its age-old culture – from colours to embroidery, there was a wide variety of bed linens, clothes and furniture.

Syeda Quratul Ain, 22, who paid a visit to Talpur Palaces, Talpur shrines, and havelis in Sindh, said that she studied the interior and exterior of the buildings closely to “understood the royal heritage in a better way.”

Her main goal was that people who are not from the area also learn about the dynasty that ruled Sindh centuries ago. “I have infused the royal heritage with Sindhi embroidery in my collection of bed sets.”

Anum Khalid, 24, chose the Kohri Garden in Saddar, Karachi as her theme for the project. She drew artistic inspiration from painter AQ Arif “because he thinks all buildings need revival.” Khalid has been able to capture images on clothes designed by her which she hopes to add to her label Basanti in Zamazama.

Truck art has been used by many artists in Pakistan and abroad but 24-year-old Samreen Moeed wanted to offer a new perspective – instead of using catchy slogans written on trucks or rickshaw motifs, Moeed relied heavily on the colourful embroidery.

Maliha Wahab’s work reflected the architecture of the city she had grown up in, Sukkur, whereas Fatima Rizvi found her artistic calling in the birds of Sindh – chikor, crow, parrots, pigeons and house sparrow were all printed in a fabric using Ikat, a dyeing technique.

Rizvi said she wants to start her own business while Anum Khalid said she plans to expand her label. Similarly, for Rubya Mudassir, who already runs a label by her name and designs bags and clutches, the next step is a clothing line.