When he winkle­s his playfu­l eyes, for us ladies, everyt­hing else moves in slow motion.
Published: January 21, 2013
Tweet Email 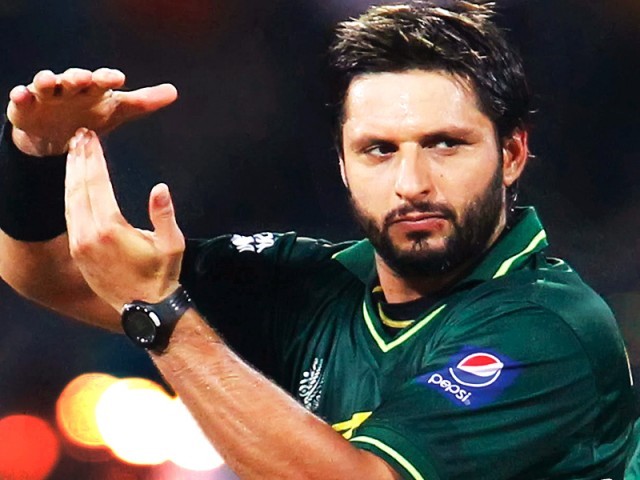 When he twinkles his playful eyes and runs his fingers through that unruly mane, for us ladies (and more than a few men), everything else moves in slow motion.

When it comes to cricketing legend Shahid Afridi, we’re all in a twisted love-hate relationship. We raise him to  Zeus-like status when he wins us a match; demote him to vermin when he underperforms. At times he can do no wrong; at times all he does is wrong. At times, he’s our saviour, at others, he’s nothing but the pariah. Through it all, the only emotion we don’t ever feel for this guy is indifference.

Boom-boom Afridi’s the kind of guy who might have the body of a tennis player, the looks, charisma and star quality of a Hollywood star but he’s still humble enough to go out every now and then and play cricket with his muhallay ke bachay. When he’s on the field, he’s as unpredictable as the Karachi ki bijli, he can either bail on you completely or make a comeback so miraculous, that the entire nation’s heart will be boom-booming for days to come.

He can be stupid enough to bite balls on live TV, silly enough to blow totally inappropriate kisses to opponents at the most stressful of times, but when he flashes that adorable grin, twinkles his playful eyes and runs his fingers through that unruly mane, for us ladies (and more than a few men), everything else moves in slow motion.

Although he’s matured from that wild, dashing mercurial 16-year-old who once broke the record for the fastest century from 37 balls to a ruggedly handsome 30-year-old, he still hasn’t lost the innate charm which oozes from every pore in interviews or on the field.

He leaves us wondering…

•  If he ever plans on going down Imran Khan’s political route.

•  If he really uses Head & Shoulders.

Girls be prepared to share the limelight with this one because he adores the camera too much, is addicted to the attention and loves rekindling his larger than life persona every now and then.

Are you the perfect bachelorette?