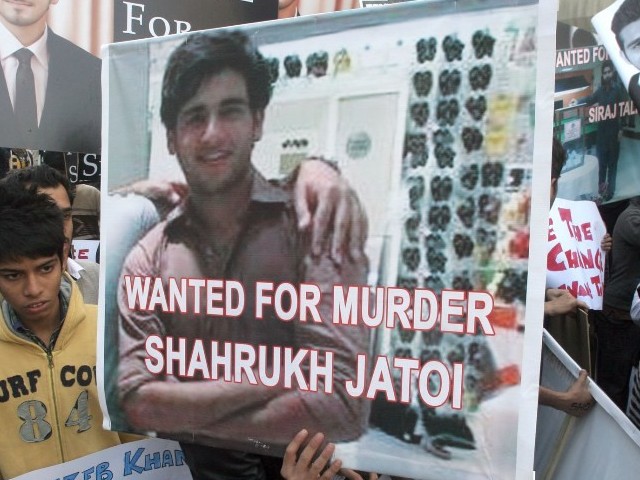 SSP Khosa says papers are being prepared for his repatriation, since his passport and visa had been cancelled. PHOTO: ATHAR KHAN/ THE EXPRESS TRIBUNE

Almost three weeks after the coldblooded murder of 20-year-old Shahzeb Khan, prime suspect Shahrukh Jatoi surrendered himself on Monday at the Pakistani consulate in Dubai.

“We had information about his whereabouts and when I reached Dubai, Shahrukh called me up and said he wanted to surrender,” SSP Niaz Ahmed Khosa confirmed to The Express Tribune from Dubai. “Thus on Monday evening, Shahrukh gave himself up at the Pakistani consulate, where he is currently being kept.”

Khosa said papers were being prepared for his repatriation, since his passport and visa had been cancelled.  As soon as they are completed, he is to be brought back, most likely on Tuesday (today) via a temporary permit or passport issued by UAE authorities.

“I am innocent and was falsely being implicated in the murder case. I will prove my innocence before a court in Pakistan,” an officer quoted Shahrukh as saying in his initial statement.

Shahrukh reportedly managed to escape to Dubai using a fake identity, ‘Nawab Jatoi.’ Sources say he left via Karachi’s Jinnah International Airport, and an inquiry has been ordered to ascertain how he managed to slip away.

A senior police officer privy to the matter told The Express Tribune that since his escape to Dubai, Shahrukh had been staying at the farmhouse of an Arab businessman in Dubai. SSP Khosa, however, did not give information about the whereabouts of Shahrukh in Dubai and said he would share this information upon their arrival in Karachi.

The residences of Sikander Jatoi, Shahrukh’s father, which have been sealed by the police on the directives of the Supreme Court, were reoccupied in Karachi on Monday.

According to police sources, Jatoi’s family and domestic help reoccupied the homes without informing the police, adding that the houses and property were sealed by the police to make Sikander’s arrest possible. “It was a pressure tactic to compel Sikander to surrender,” said a senior investigation officer. “I think the aim behind sealing his properties is achieved with the arrest of Sikander Jatoi and his son.”

According to sources, Clifton SSP Javed Maher has reportedly been transferred because he failed to stop the reoccupation of Sikander’s houses. The decision was also reportedly connected to his failure to stop protesters from gathering at Bilawal Chowrangi on Monday to protest Hazara killings.

“Shahrukh’s surrender is a step closer to getting justice,” said Shahzeb’s relieved father, DSP Aurangzeb, upon hearing that the prime suspect was in police custody.

“Had I given up thinking that I can’t fight against the powerful, I wouldn’t have achieved anything. But thank God, I remained steadfast and decided to challenge the system where the children of the rich are not punished for their crimes,” he added.

A close friend of Shahzeb, Ahmed Zuberi, said, “We are happy that Shahrukh is in police custody. But for us real happiness will come when the criminals [killers] are punished.”

Zuberi, who accompanied Shahzeb to the hospital in his final moments, said the movement for justice would continue till the culprits are convicted. “Shahrukh claims he is innocent. We all want to ask him, why did he escape if he is not guilty?”

Another friend, Talha, said, “Justice for Shahzeb means justice for all, and we hope the court and police punish the criminals. The whole nation stood up for this boy.”

Congratulatory messages were also noted on the Facebook page, “In Memory of Shahzeb Khan” following the arrest.

On December 25, 2012, Shahzeb was murdered allegedly by Siraj Talpur and Shahrukh over a petty issue near Mubarak Masjid, DHA, in Karachi.

His death sparked a movement on social media and triggered off a series of protests, condemnations by political parties and a suo motu notice by the chief justice.