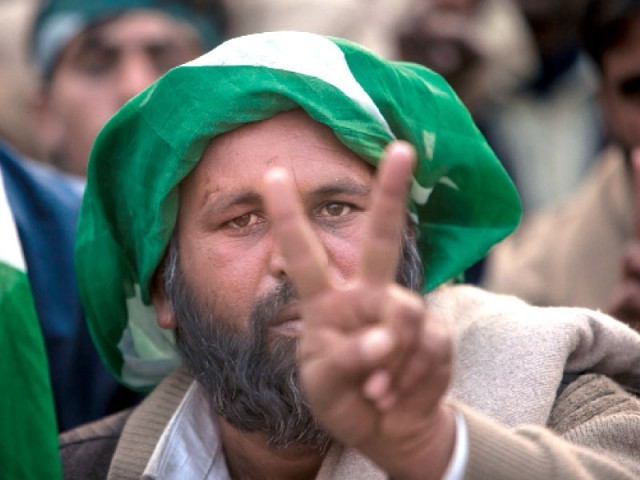 The participants are willing to stay for “as long as it takes” to bring a change in the country. PHOTO: MYRA IQBAL/EXPRESS

With no idea about how to campaign for electoral reforms in the constitution to ensure that the ruling elite do not return to power, participants of the long march were nevertheless committed to changing the political system.

People from across the country, literally from Karachi to Peshawar, were crowded in Blue Area, the capital’s commercial district, for a change of government which they hoped would miraculously translate into good governance. Some of them were carrying placards inscribed with “No water and No electricity,” making it clear that what they wanted most were basic necessities of life.

“We are not here with our sisters and brothers on a joy trip, but to get rid of the incumbent government which did not even bother to pay heed to the demands of the Hazaras who held a sit- in Quetta for more than three days,” said Bilal Shakir from Attock.

We are here to force them to leave and give power to ‘sensible’ people, one of them said, but he wasn’t clear about the composition of the kind of government he wanted.

Tariq from Hazro, Attock, said he had sold off bike for this trip and said he would stay here till the party chief ordered an end to the sit-in.

A quick chat with participants revealed that they felt it was time to air their grievances and they had marched to the city where policymakers and power brokers reside and work, so they could demand basic necessities and a government which is able to deliver them.

For Javed of Gujranwala, change might be far away but, “the time is ripe to reach that place, whether it takes days or months.”

“We will stay here whether it takes days or weeks,” said Gulshan Iqbal, one of the hundreds of women in the march. Her optimism was shared by others.

Shujaat Ali, his green sweater matching the colour of the Pakistani flag he carried on his shoulder, was one of the early birds at the scene. Ali said he travelled on his own dime on one of the 38 buses that reached Rawalpindi for the long march from Dera Ismail Khan. “This long march has given people some hope in times of crisis,” he added.

Dr Mahmood, who came all along from Layyah with 18 members of his family in public transport was equally hopeful for concrete changes in the prevailing political scenario.

Majority of participants were from the lower middle classes of rural areas of Punjab and had little idea about the electoral reforms or the charter of demand presented by Minhajul Quran chief Tahirul Qadri. “We have full faith in our chief as my family is associated with him,” said Shakir from Dera Ismail Khan.

Fatima Firdous was enthusiastic about the number of women and children in the march. “It is very encouraging that people including a large number of women have turned up, following in the footsteps of their party chief,” said Firdous.