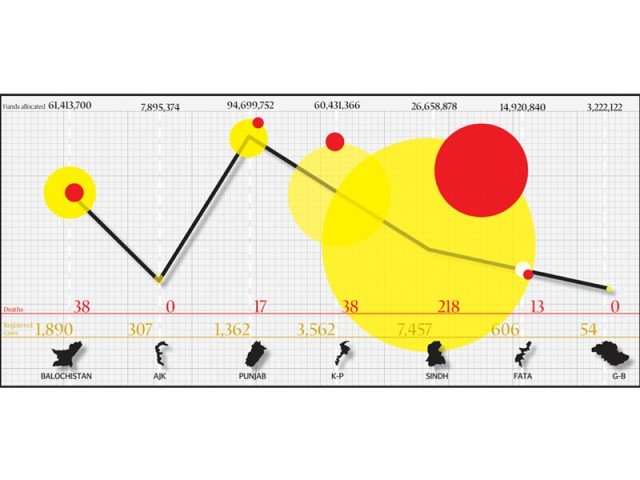 As the New Year began, the outbreak of measles in Sindh and Balochistan took on a more menacing form. It had grown from a relatively mild threat to a severe one, spreading quickly and taking 324 lives in the outgoing year. Up to 14 lives were lost in just the first week of January.

Health officials say that most people died due to post-measles complications such as pneumonia, encephalitis – an inflammation of the brain while a patient recovers from the diseases – and diarrhea.

According to the data provided by the World Health Organisation (WHO) and Federal Expanded Programme on Immunisation (EPI), so far a total of 15,420 confirmed cases of measles have been reported from across the country including Gilgit-Baltistan (G-B) and Azad Jammu & Kashmir (AJK).

A total of 788 measles outbreaks –a cluster of five or more clinical cases in a single location over a 30-day period with at least one confirmed case – were reported across the nation.

Causes behind the outbreak

WHO and EPI officials told The Express Tribune that the government pushed preventable diseases like measles to the back burner, despite releasing a total of Rs269.3 million, over the last three years to carry out anti-measles campaigns across the provinces; as it geared its efforts onto eradicating other viruses such as polio.

An EPI official said that currently, there are a total of 9,000 vaccinators across the country, to vaccinate approximately 5.8 million children every year. However, a large majority of the vaccinators have motorbikes and do not possess enough resources to cover fuel costs; hence they are unable to inoculate children from rural areas.

Official documents state that last year from January to November, the coverage of routine immunisation remained below 80% in 35 districts, which include ICT, Karachi, Hyderabad, Quetta, Gilgit, Skardu, Jaccobabad and Kohat, among others.

Officials say that the provincial health departments misinformed EPI by saying that the coverage remained at 95%, and they also hid cases reported in their respective regions.

“These cases were highlighted through the media, otherwise they [would have] remained under covers and taken more lives,” an official said.

Confirming misreporting from different authorities EPI National Programme Manager Dr Zahid Larik said: “There is a misconception about the measles outbreak in the country that is caused due to the shortage of vaccines. It happens due to low coverage of routine immunisation and underreporting of cases.” He added that all the provinces were provided with vaccines on time.