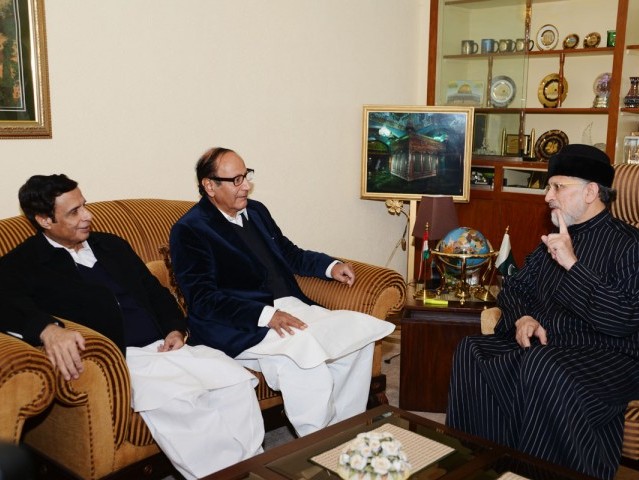 LAHORE: After being exhorted for days, and a long march looming, the government finally sent its emissaries to hold talks with Mihajul Qural International chief Dr Tahirul Qadri in Lahore on Friday, Express News reported.

Speaking to the media afterwards, Shujaat said that after being empowered by parties part of the ruling coalition, they had started the process of negotiation. “We have met with them, and these negotiations will continue, and hopefully some positive outcome will come of this.”

Asked about whether the talks would help offset the January 14 march, Shujaat said that it was not the focus of their talks.

At this Qadri made it clear that their march will go ahead as planned. “Do not derive any meaning that their visit would have any affect on the January 14 march. Forget about cancelling the march, it will not even be postponed.”

Deputy prime minister Pervez Elahi said that “long marches have happened before, the point is to find an amicable solution and we hope to work towards that.” He added that they have started negotiations and the process will continue.

Qadri summed it up that even with the long march, the solution to his demands would have been found through negotiations, and this is the beginning of that process. The MQI chief added that he will unveil his charter of demands on Saturday.