No conclu­sion yet as to how the fire starte­d.
By Shamsul Islam
Published: January 10, 2013
Tweet Email 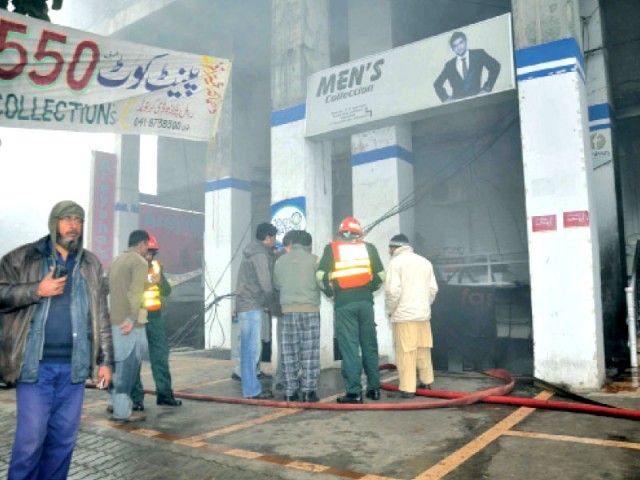 The fire started at a shop in the basement of Ripal Plaza at around 8am. It soon spread to the shops above it.

Three people were injured on Wednesday in a fire that started at a shopping centre.

They were taken to a hospital, where the condition of two of them was reported to be critical.

It took the rescuers four hours to put out the fire.

The fire started at a shop in the basement of Ripal Plaza at around 8am. It soon spread to the shops above it.

Three people were trapped in the shop for an hour before they were pulled out by the Punjab Emergency Services (Recue 1122) workers. The injured, identified as Imran, Akmal and Aslam, were taken to Allied Hospital, where doctors treating them said that two of them were critical.

Several people, who were helping the rescue officials, were also injured and treated on the spot.

The owner estimated the loss at millions of rupees.

Nabeela Siddique, who said she lived close-by, also said that she was walking her children to the school when she heard people shouting for help.

Soon after, she said, she saw some people rushing out of the centre.

“Some shopkeepers and residents of the area ran with buckets of water to put the fire out, but it had already spread to more shops.”

Some shops were still closed and there weren’t many people when the fire started.

While the reason of the fire has yet to be ascertained, some shopkeepers speculated it was started by an electric short circuit.

Ghulam Fareed, whose shop was also damaged in the fire, said the electric wiring in the basement was exposed. He said several shopkeepers had mentioned it before the owner of the building, but it had not been covered.

Some shop keepers later protested against the owner of the building and accused him of using sub-standard wiring in the building.

Plaza owner Mian Tariq Habib said the wiring was not sub-standard. He said the fire was likely a result of the shopkeepers’ negligence.

He said they (shopkeepers) used UPS devices inappropriately and sometimes overloaded the batteries. He said a spark in a UPS might have started the fire.

When an electrician was asked if spark in a UPS battery could cause fire, he said a UPS battery was too small to start a large fire.

Such sparks, he added, were not enough to start a fire in the absence of a highly inflammable material.