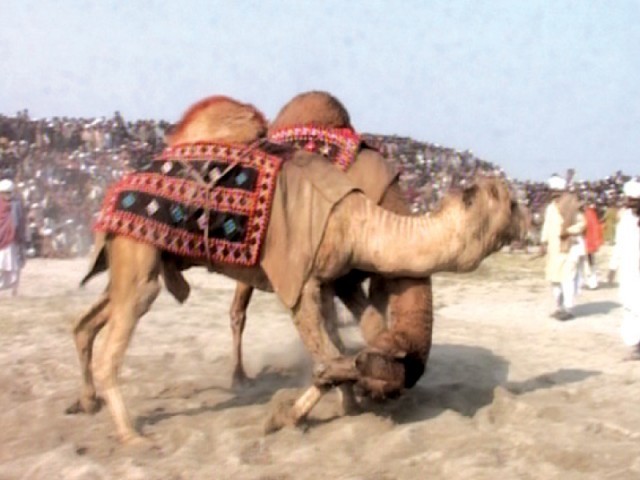 The bouts are followed by a folk Bhangra dance by the camels to the beat of drums.

A camel wrestling event was held on Monday as part of the 900th annual mela of Pir Sajar Haa Sultan in Rahim Yar Khan.

More than 500 spectators had gathered in Basti Muhammad Nawaz Jhalan of Jhatta Bhatta to watch the 62 camels fight in teams of two. The participants are from Punjab as well as Sindh.

Mian Mohiuddin, the event organiser and caretaker of the Pir Sajar Haa Sultan shrine, told The Express Tribune that encouraged by the huge turnout at the event, he had requested the government for permission to organise the event at national-level.

He regretted that the department concerned had not showed any interest.

He said such events were organised by private sponsors and there was no contribution from the government. He said the government should play its role in providing people platform for recreation.

Camels named Chambeli, Malangi and Pappu were most appreciated by the spectators.

Ahmed Bakhsh, owner of one of the camels, said most wrestling camels were trained to fight one-to-one bouts. “They grapple continues until one of them falls to the ground. The last one standing is announced the winner,” he said. “After the camel wins, a piece of white cloth is tied around the camel to announce its victory,” Allah Baksh said.

He said he had been taking care of camels for 30 years. Training camels for wrestling was his ancestral hobby that had now become a family tradition. He said he also wanted his sons to carry it forward.

Several other camel owners said that almonds, butter and dry fruits were a routine part of the animal’s feed.

The camels and the area are both decorated with colourful flowers and adornments. The bouts are followed by a folk Bhangra dance by the camels to the beat of drums.

Some solidarity: PML-N a no-show at Governor’s meeting