Singer raps of rape, abuse and atroci­ties that Afghan women have endure­d during decade­s of war.
By AFP
Published: January 3, 2013
Tweet Email 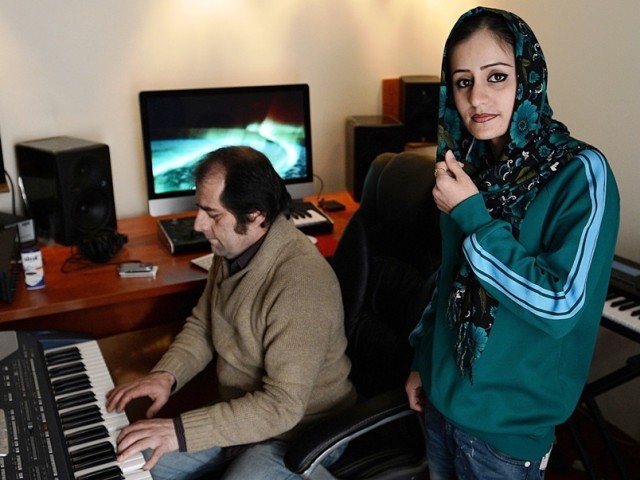 KABUL: Sporting a long leather coat and western jeans under a headscarf, Soosan Feroz looks like many modern women in Kabul.

But she is a surprising new phenomenon in this conservative country – the nation’s first female rapper.

Her lyrics though are not unfamiliar for many of her fellow countrywomen – she raps of rape, abuse and atrocities that Afghan women have endured during decades of war in a country gripped by poverty.

“My raps are about the sufferings of women in my country, the pains of the war that we have endured and the atrocities of the war,” Feroz told AFP in an interview in the office of a local company that is helping her record her first album, between local performances including at the US embassy in Kabul.

Like most fellow Afghans, the 23-year-old says her life is filled with bitterness – memories of war, bombing and a life at refugee camps in neighboring Iran and Pakistan.

She was taken to Pakistan as a child by her parents and later to Iran, escaping a bloody civil war at home in 1990s.

Two years after the 2001 US-led invasion of her war-scarred nation that toppled the Taliban, the then-teenager returned home with her family.

She worked as a carpet weaver with her other siblings for a living until she discovered her new talent.

Told that rap and hip hop had become a way for many artists around the world to express daily hardships in their lives, Feroz says: “If rap singing is a way to tell your miseries, Afghans have a lot to say.

She recalls her woes at Iranian refugee camps in her first recorded piece of music, “Our neighbours”, which has been posted on Youtube and viewed nearly 100,000 times:

“What happened to us in the neighbouring country?

“We became ‘the dirty Afghan’

“At their bakeries we were pushed at the back of the queue.”

The lyrics are borne from personal experience, Feroz said. “As a child when I was going to bring bread from our neighbourhood bakery, the Iranians would tell me, ‘go back, you dirty Afghan’.

“I would be the last one in the line to get my bread,” she said.

Millions of Afghans still live in Iran and Pakistan, which together hosted about seven million refugees after the former Soviet Union invaded Afghanistan in 1979.

Feroz was too young to remember the bloody battles of the 1980s between the Russian soldiers and freedom fighters known as mujahedin but her first song is full of war tales, with one line proclaiming: “We went to Europe for a better life (but) in refugee camps we rotted.”

Thousands of Afghans put their lives on the line every year to reach Europe through dangerous and illegal routes on land and sea. Those who make it often spend years in isolated refugee camps.

Afghan pop star Farid Rastagar has offered to help the young artist release an album, the first song of which will be released in January.

One of the songs is called “Naqisul Aql” which can be translated as “deficient-in-mind” – a common belief about women among Afghan men.

“In this rap, she sings about the miseries of the women in Afghanistan, about abuses and wrong beliefs that still exists about women,” Rastagar told AFP.

Afghan women have made some progress since the fall of the Taliban but many still suffer horrific abuse including so-called ‘honour killings” for percieved sexual disobedience.

Feroz, the daughter of a former civil servant and an illiterate housewife who remarkably let their daughter sing, has already made scores of enemies not only among conservatives but within her own family.

After releasing her first song on the internet, Feroz’s uncles and their families have shunned her, accusing her of bringing shame on them.

Others, mostly anonymous callers, have threatened to kill her.

“What’s my fault?” she asks. “I always receive phone calls from unknown men who say I’m a bad girl and they will kill me,” she says, her dark eyes welling with tears.

Sitting next to her is her father, Abdul Ghafaar Feroz, who says he prides himself on being her “personal secretary”.

“I’m not deterred,” Feroz said, her father nodding his head in agreement. “Somebody had to start this, I did and I don’t regret it and I will continue. I want to be the voice of women in my country.”