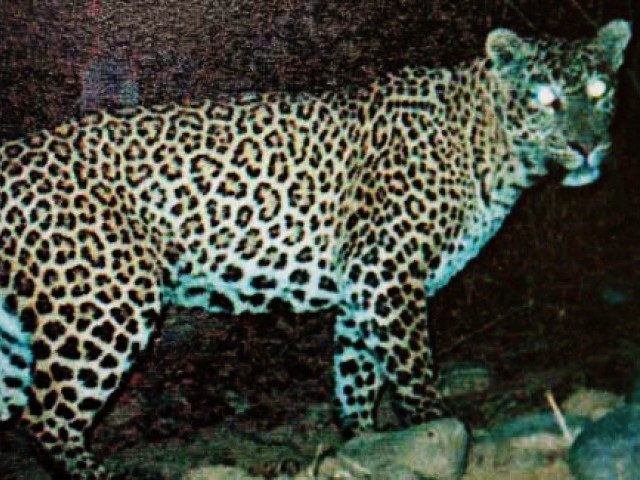 File photo of a common leopard caught by a trap camera in 2007 at the Ayubia National Park. PHOTO: COURTESY WWF

Man and beast have tussled for eons on who gets to be on top of the food chain. In the end, man came out on top with guns blazing. Such the tables have turned, that it has sent the World Wildlife Fund (WWF) in to a scramble to protect a fledgling yet endangered leopard population in the wildlife reserve of Ayubia National Park, Galiyat.

“The focus of advance research is to find out threats to common leopard, check out its migration range and for adopting latest measure on scientific grounds for conservation of wild cats in the region”, Wasim Ahmad, a coordinator for the international non-governmental organisation, working to save the endangered species of wild cat.

Talking to APP, Wasim said that their target was to install radio collars on at least two leopards in order to track their movement. For this purpose traps have been set up around the park.

Though the population of big cats in Galiyat is satisfactory, but still the species continues to face numerous threats like a fast shrinking habitat, human-leopard conflicts and reducing forests, Waseem added. Galliyat, he continued, is home to the largest population of common leopards in the country and reduction of habitat for the rare wild species is posing a threat to its survival in the region.

Similarly, human-leopard conflicts, arising in response to attacks on livestock, also pose danger to the survival of wild cats in the area. This was evident when in November locals discovered a leopard, poisoned by a local since it was feeding off his cattle.

The matter has been complicated with the paucity of space in Ayubia National Park which has left no choice to the animals but to spread to inhabited areas and seek prey. “Its time to draw guidelines for leopard management in Galliyat so that a self-sustained breeding population of leopard can co-exist with human beings,” he added.

“Human-carnivore (meat eating animal) conflict always has negative impact on carnivore population because of retaliatory killings and when the predator does not find wild prey due to reduction in habitat, it starts depending on livestock, and in some cases even on human beings,” Wasim elaborated.

Talking on the migration range of leopards, Waseem said that the Ayubia National Park situated in Abbotabad district is the only sanctuary for leopards in Galiyat, but the area of the park is limited and the animal has spread into the whole region.

The Ayubia National Park is spread over an area of 3322 hectares but it has now become insufficient for leopards owing to an increase in their population. Sightings of leopard are now reported from all over the district, from the Turnawai forest in the north to the Murree hills in the south and Margalla hills in the west, he added.

Absence of safe corridors along their migratory routes, the leopards are often spotted and at times even clash with people. The animal has also been frequently reported crossing metalled roads around the National Park in Dunga Gali, Nathia Gali and Kalabagh, spreading fear and panic among the locals.

He said the research factor is also based to chalk out leopard management plan containing biological information including distribution of leopard population, their prey, movement pattern, habitat use, awareness among the public, information and capacity building.