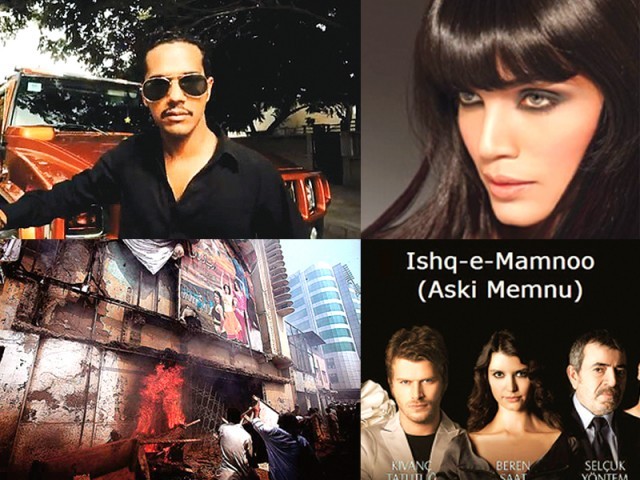 KARACHI: The year 2012 was filled with joy, entertainment and some unfortunate events, but luckily we dodged a bullet as it didn’t come to an end as per the Mayan calendar. It was jam-packed with ups and downs, and here’s a list of happenings we thought changed the game entirely.

This channel shook things up for local television channels. No one could have predicted that a new channel, with landing rights to foreign content, would become an instant sensation despite airing no original local content. Urdu1’s Turkish soap Ishq-e-Mamnoo entrapped not only young girls but older housewives as well. It became so popular that it eventually created a major debate in the entertainment industry with regard to channels’ preference to foreign content over local entertainment. There is also some talk that Ishq-e-Mamnoo bagged higher ratings than the widely popular Humsafar, coming close to 11.5 on the rating metre.

Songs that have been a raging success in Pakistan can be easily recalled, such as Billo De Ghar and Purani Jeans; even Jal’s Aadat, which was a super hit, didn’t have the same impact. But Ali Gul Pir’s Waderai Ka Beta came and conquered the music scene. Not only was Pir able to introduce the phrase “saeen tau saeen” in our pop culture, but he also changed the dynamics of the pro-record label industry by using YouTube as his medium. Several tracks followed in Pir’s footsteps, such as Quettay Ka Pathan and Awaam.

An unfortunate episode took place this year on September 21, where Pakistani lost a huge part of its history. Violent mobs burnt down cinemas all over Pakistan during a full day’s protest against anti-Islam film, Innocence of Muslims. Cinemas Nishat, Prince, Capri and Bambino in Karachi and cinemas Firdous, Shama, Naz and Capital in Peshawar were all burnt to ashes in retaliation to the controversial film, resulting in huge losses. Only Bambino, Capri and Shama have been reconstructed and are now back in business.

Many weren’t aware of this play that took place in a theatre hall which was under construction at the National Academy of Performing Arts, as its advertising was rather limited. Equus, written by Peter Shaffer, directed by Sunil Shankar and translated in Urdu by Shankar and Nazarul Hassan is one of the best plays produced in Pakistan in terms of presentation and execution.

The three-hour-long play is a clear demonstration of talent and skills of young Pakistani thespians. The story is about a 17-year-old boy who ends up blinding six horses in a stable where he used to work. The United Producers Association (UPA) has been around for quite a while but made its presence felt for the first time to raise the issue of foreign content being aired on local channels’ during prime time hours. Under the leadership of Rashid Khwaja (president) and Asif Raza Mir, UPA is the only functioning guild of artists. Its purpose is to unite under one banner to raise common pleas before the authorities.

Aamina Sheikh started off her career on the small screen with a talk show that featured short films. But in no time, this beautiful lady has earned herself a colossal fan base; she has also slowly become the prime face of Pakistan’s indie cinema. Aamina has proven herself on the ramp as well as on television, with dramas such as Mera Saeen. But it doesn’t end there; she grabbed the award for Best Actress in a Lead Role in her film Lamha (Seedlings) which has now entered numerous film festivals. Her latest project Josh, which has yet to be released here, will hopefully add to her huge list of accomplishments. The duo of seasoned musicians from Peshawar, Sajid Ghafoor and Zeeshan Parwez impressed the audience with their unique sound and original album, The Harvest. However, in the second half of 2012, they came into the limelight with their single called Sanity, whose video left a hypnotic effect; it’s a typography-based video directed by Shahab Qamar, a Brisbane-based Pakistani. This video has become one of the most trend-setting works as far as music videos in our industry are concerned due to the way it was executed.

In order to control the frenzy created by Innocence of Muslims, YouTube was banned in September throughout Pakistan. Whether or not it served the intended purpose of the Pakistan Telecommunication Authority is a different story but clearly, its consequences were not carefully scrutinised. As Pakistani musicians were slowly becoming heavily reliant on public forums such as YouTube, this avenue was taken away from them. With the lack of record labels in the country and Indian content dominating local channels, this seems to be the last nail in the coffin for Pakistani musicians. With his second video Ruckus (which he directed himself) and various international ventures, Usman Riaz shined throughout 2012. The 21-year-old music genius also composed the score for the film, Lamha (Seedlings) and even had the chance of speaking at Ted Global, which featured numerous inspirational speakers from around the globe. At such a young age, Riaz has achieved a lot in terms of quality in music and international exposure. All we can say is that we need more like him!

This tenth inclusion in our list might surprise a few but the second season of Indian show Coke Studio @ MTV clearly mastered the art which Pakistan founded! With audio visual technology on a grand level, the show introduced a different format this season by bringing together six different producers to create magic on one stage. The format did wonders as popular singles such as Madari and Husna were its end product. However, after a disappointed season 5 of Coke Studio Pakistan, let’s hope we find some inspiration from our neighbours and own the stage we created.