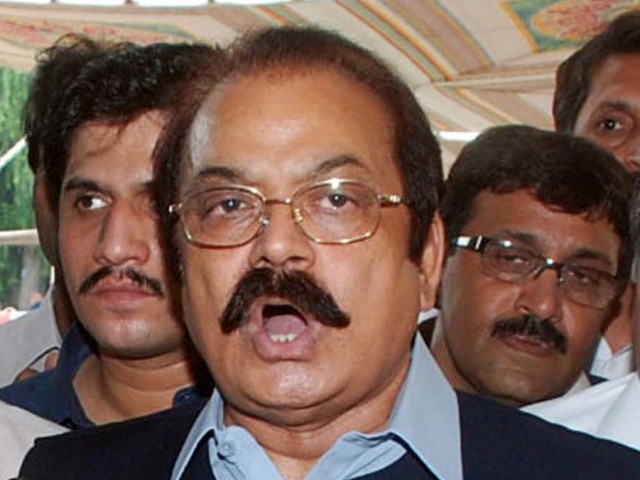 Sanaullah says instead of learning from past failures establishment had come up with new tactics to undermine the democratic process through money. PHOTO: PPI

The PA resumed its session at 5.20pm instead of the scheduled time of 3pm. Speaker Rana Muhammad Iqbal chaired the session. The house offered fateha for Bilour but did not pick up any agenda, rather members spoke about terrorism most of them blaming the Army for it.

Sanaullah said that Bilour’s death was not a lossonly for Khyber Pakhtunkhwa but for the entire country. He said the military establishment had not learnt from its mistakes in the 1980s when it had promoted private jihadis. He said that Army had inducted young students from madrassas and youth from all over the country in the name of jihad to defeat Russia.

He said that the youth fought for 12 years and defeated Russia. He said these fighters were not recruited to a disciplined state force.

He said once they started fighting for sundry causes the military establishment declared them terrorists.

The law minister said instead of learning from past failures the establishment had come up with new tactics to undermine the democratic process through money.

Sanaullah said that Tahirul Qadri had spent Rs500 million on his public gathering and threatened the continuity of the democratic system. He said instead of threatening the democratic set up or torturing politicians the military establishment should allow people to cast their votes in free and fair elections.

Nazim Shah said that three million Afghan refugees in Pakistan were responsible for the poor law and order situation. He said the government should send back the Afghan refugees but instead seemed to have given them permanent residency.

Through a unanimous resolution, the house condemned the suicide attack on December 22 and expressed its condolence over the murder of Khyber Pakhtunkhwa Senior Minister Bashir Bilour.

The house also unanimously condemned all types of terrorism. It said that the time had come to show unity against terrorism.

They said the establishment should respect the citizens’ right to ballot.

The session has been adjourned till Thursday (December 27) at 3pm.