Pride and the province: Political rivals dance with one another to celebrate Sindh Culture Day

Pride and the province: Political rivals dance with one another to celebrate Sindh Culture Day 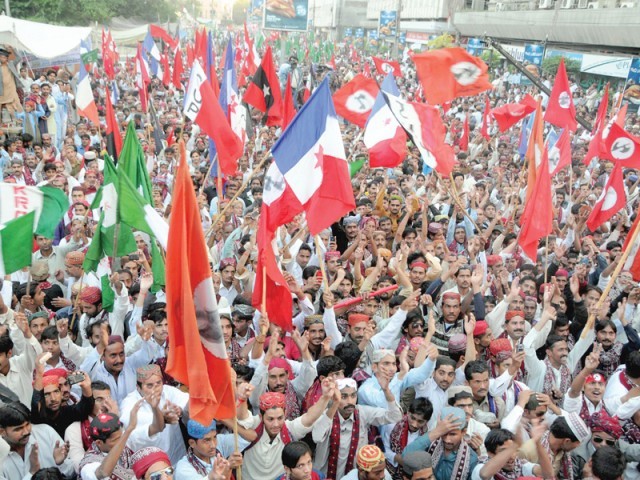 A sea of red swept the roads around the Karachi Press Club where thousands from across the city turned up to celebrate Sindh Culture Day on Friday. PHOTO: IRFAN ALI/EXPRESS

KARACHI / HYDERABAD: All of the province’s main arteries turned crimson on Friday as people clad in Ajrak and heavily embroidered Sindhi caps came out to celebrate Sindh Culture Day.

People packed in cars, motorcycles, buses and trucks took to the streets and then converged at the Press Club where festivities had been organised by the Sindhi Media Forum, a body representing all print and electronic Sindhi media except the Kawish group.

In Karachi, a sea of red swept the roads around the Press Club where thousands from across the city turned up. The rallies of different nationalist and political parties, including Pakistan Muslim League-Functional, Muttahida Qaumi Movement and Pakistan Muslim League-Nawaz also ended up outside the Press Club. Political differences were temporarily set aside as gleeful people danced and shouted slogans for the unity of the province. Renowned Sindhi singers, including Ahmed Mughal, Irfan Samoon, Taj Mastani, Tufail Sanjrani also belted out popular tunes for the charged crowd.

Similar scenes were seen in other parts of the province. Jagdish Kumar, one of the participants of the festivities outside Hyderabad Press Club, said, “This day revives our cultural and national identity by bringing us back to our roots.”

Like the gathering in Karachi, flags of political rivals, including Pakistan Peoples Party and PML-F, fluttered close to one another in Hyderabad. “Our love for Sindh, our language, Sindhi cap and Ajrak is far more supreme than our political rivalries,” said Suleman Faqir, who spent the whole day dancing and welcoming the rallies passing through the camp which PML-F had set up near Hyderabad Press Club.

This is the fourth consecutive year that the Sindh Culture Day has been celebrated. The day was first observed by the Kawish group in reaction to criticism directed at President Asif Zardari for wearing a Sindhi cap during an official visit to Afghanistan in 2009.

For the last three years, however, two groups of Sindhi media are marking the day on separate dates – the Sindhi Media Forum announced December 21 as ‘Culture Day’ and the Kawish group said ‘Sindh Unity Day’ would be held on December 23.

Saleem Kunbhar, a teacher who came to take part in merriment outside the Hyderabad Press Club, said that he would celebrate on both days. “Sindhi people are not divided. We will participate in the festivities on both the days.”

Efforts to settle on a mutually agreed date have failed for the last two years. Representatives of both groups met two weeks ago in Karachi, but could not settle on one date. “We proposed that we both withdraw from the announced dates and celebrate together on December 22,” Lala Rehman Samo, a member of the forum told The Express Tribune. At the meeting, Qazi Aslam represented the Kawish group while Qazi Asad Abid, chief editor of Ibrat group, spoke on behalf of the Sindhi Media Forum. According to Khalid Khokhar, an editor working with the Ibrat group, said, “The other side was not willing to budge. They claim the culture day was their initiative and so they [believe that they] have the moral right to call the date.”

Ali Kazi, the editor of Kawish newspaper and CEO of the Kawish Television Network (KTN) said that the group wanted to celebrate the day over the weekend because all offices and schools are closed on the day.”Friday is a working day. I suggested that we celebrate the day together on Saturday.”

While the disagreement persists between the media groups, the government has conspicuously taken a back seat.

The members of the forum are willing to let the culture department take the lead and announce a date. The provincial culture minister and culture secretary, however, did not respond to give a reaction on this issue.

You can see more pictures here.

Sparc workshop: ‘Increase age limit for recruitment in the army to 18’