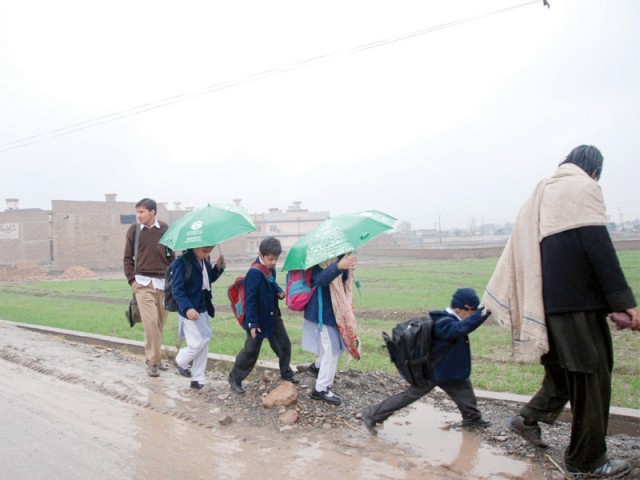 From school children to the elderly, most commuters faced difficulties because of water on the roads. PHOTO: EXPRESS

Heavy rains and snowfall was experienced across Khyber-Pakhtunkhwa and the tribal areas.

Commuters in the walled city were stuck for hours in traffic jams on Thursday as rain wreaked havoc in Peshawar. The city received approximately 21 millimetres of rain by 2pm Thursday during the downpour that began Wednesday evening.

Director of the meteorological office in Peshawar, Muhstaq Ali Shah said that a western disturbance system had hit Peshawar valley as it usually does this time of the year. This resulted in winter rainfall in the city over 22-24 hours. The maximum and minimum temperatures also dropped by around one degree centigrade each.

Motorists remained immobile for hours on various roads, particularly along the main traffic artery near the provincial assembly, while water overflowing from gutters kept shopkeepers and pedestrians at bay.

“Majority of the shops were closed in Kohati and Yakatoot areas after filthy water gushed out from gutters due to the poor drainage system,” said a resident, Muhammad Javed. He added that people were facing a shortage of clean drinking water due to load-shedding.

Shah said that according to the forecast, the rain will stop on Thursday night in Peshawar, Cherat, DI Khan, Mardan, Charsadda, Swabi and Nowshera.

In Hazara, Malakand, and Kohistan, rainfall is expected to continue till Friday. He said temperatures will plummet in areas which had received rainfall. “There is no chance of flooding because of these rains,” he added.

Elsewhere, in Kalam and Malam Jaba, there was three to six inches of snowfall, respectively. More snowfall is expected in the coming days in Chitral, Hazara, Kohistan, Parachinar and Gilgit-Baltistan.

Residents in Abbottabad said the main Nathiagali road leading up to Murree was covered by about eight to nine inches of snow. As a result, traffic remained suspended on the road, which also connects several villages to Nathiagali and Abbottabad city.

While farmers in DI Khan saw the rain as a blessing, other residents said blocked roads affected their mobility.

“It started raining at around 5am Thursday and is still continuing,” said DI Khan’s meteorological department in-charge, Mashal Khan.

Roof of a computer block of a government higher secondary school for girls also collapsed. As a result, a grade 9 student, Quratul Ain, was injured.

People residing in the mountains of Waziristan, which borders neighbouring Afghanistan, said the region received its first snowfall of the season.