US points finger at Pakistan for undermining Afghan security: Report

US points finger at Pakistan for undermining Afghan security: Report 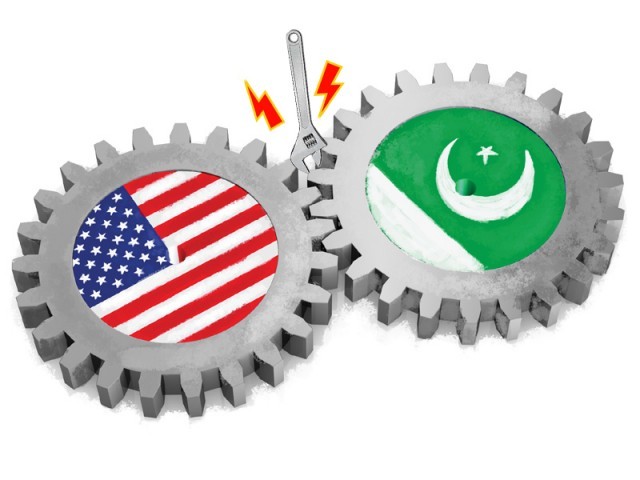 The report noted the better US relations with Pakistan, which agreed in July to reopen Western forces' supply routes into Afghanistan.

WASHINGTON: Despite an easing of tensions with the United States and increased cooperation, Pakistan is persistently undermining security in Afghanistan by permitting safe havens for insurgents, a Pentagon report said Monday.

In a twice-a-year war assessment mandated by Congress, the Defense Department said that the 68,000 US troops in Afghanistan and their allies had succeeded in preventing Taliban advances while limiting civilian casualties.

But Taliban havens across the border in Pakistan, the limited capacity of the Afghan government and “endemic corruption” pose the greatest risks as the United States prepares to pull out troops by the end of 2014, the Pentagon said.

The report noted the better US relations with Pakistan, which agreed in July to reopen Western forces’ supply routes into Afghanistan. Pakistan had refused access after a US border strike killed 24 of its troops in November 2011.

“However, Pakistan’s continued acceptance of sanctuaries for Afghan-focused insurgents and failure to interdict (explosive) materials and components continue to undermine the security of Afghanistan and pose an enduring threat to US, coalition and Afghan forces,” the report said.

The report, which covered developments from April through September, said that Pakistan “has contributed to US interests while simultaneously falling short in other areas.”

The Pentagon also reported modest progress between Afghanistan and Pakistan. Since then, Afghan President Hamid Karzai said that an attack last week on the Afghan intelligence chief was planned in Pakistan.

The Pentagon report said that enemy attacks went up one percent from April-September 2011. But it attributed the rise to a shorter poppy harvest, which kept low-level insurgents busy for less time, and said life had improved in urban areas.

Enemy attacks “are now disproportionately occurring outside of populated areas, and the security of many of Afghanistan’s largest cities increased substantially during the reporting period,” it said.

However, the Pentagon figures showed that enemy attacks were higher than in 2009 before President Barack Obama ramped up troop numbers. The last of the 33,000 “surge” troops withdrew in September this year.

Opinion polls show that most Americans want to end their country’s longest-ever war, which was launched following the September 11, 2001 attacks by al Qaeda militants living in Afghanistan under Taliban rule.

The Pentagon report described “substantial progress” by Afghans in taking the lead in their own security, but acknowledged logistical and management shortcomings in the national forces as well as corruption.

A Defense Department official, briefing reporters on the report on condition of anonymity, said that the goal remained for Afghan forces to be able to operate independently by 2014.

“Is it going to be a challenge? I agree with you, yes,” he said. “Will there continue to be a need for training and advising after 2014? Yes.”

The report recorded 66 insider attacks on NATO or Afghan national forces, a sharp rise from 43 the year earlier, but voiced hope that new countermeasures would reduce the threat.

The Pentagon gave a positive assessment to efforts to reduce civilian casualties, seen as a major cause of resentment toward the Western-backed government.