Resolu­tion in Sindh Assemb­ly expect­ed to be passed today.
By Our Correspondent
Published: December 7, 2012
Tweet Email 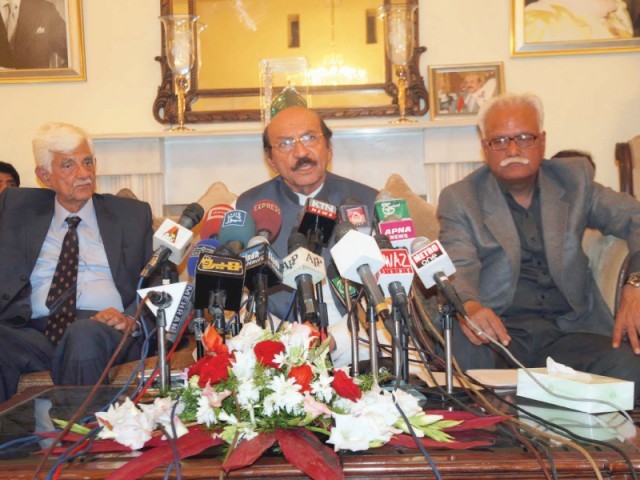 Sindh is exerting all its political might to condemn the Kalabagh Dam – a contentious project revived recently by a Lahore High Court (LHC) decision.

Presented on Thursday, the Sindh Assembly is set to pass a resolution against the dam, while the chief minister lashed out at the LHC decision following the assembly session.

Pakistan Peoples Party (PPP)’s Sindh Council in a meeting held at the Chief Minister House on Thursday adopted a resolution against the Kalabagh Dam. Sindh Chief Minister Qaim Ali Shah, expressing dismay over the decision, termed it ‘intolerable’ for the people of Sindh.

Earlier in the day, the Sindh Assembly echoed with impassioned speeches against the decision and the project. Though a resolution was not passed, it is expected to be done today (Friday).

The opposition and treasury were both eager to outmatch each other’s condemnation of the project. Both benches moved different resolutions to condemn the verdict and called it a “conspiracy” that can trigger a civil war in the country. The house witnessed pandemonium as lawmakers accused each other of supporting the Kalabagh Dam during their earlier tenures.

PPP MPA Imran Zafar Leghari proposed the resolution. Soon after, all the members rushed in to declare their party’s opposition to the mega project. In an emotional speech, Pakistan Muslim League – Functional (PML-F) Nusrat Sehar Abbasi called the dam a “bomb” that can claim millions of lives.

In the evening, addressing the media after the meeting, which was attended by a number of key PPP leaders, the Sindh chief minister said that the decision was unacceptable not only for Sindh but for the people of two other provinces as well.

“It is a unilateral verdict which aims at imposing the decision on people of the other three provinces who have already rejected the project by passing resolutions in their respective assemblies,” he added.

Lashing out at Lahore High Court for its decision, he said that the court gave a verdict without listening to the other parties affected by the decision.  “The forces behind the decision aim creating a divide among the four provinces,” he revealed.

Shah added that while people were going through severe water shortages the court was busy making decisions to please a few others. The minister also said that the court had no jurisdiction to give such orders, which have now taken the shape of a political issue.

The PPP co-chairman Bilawal Bhutto Zardari is expected to address the public gathering in Garhi Khuda Bux on the occasion of Benazir Bhutto’s death anniversary. This will be the first event in which the chairman will directly address the public.

The chief minister also stated that the elections would be held on time and after three months President Zardari will announce the final date for the elections.