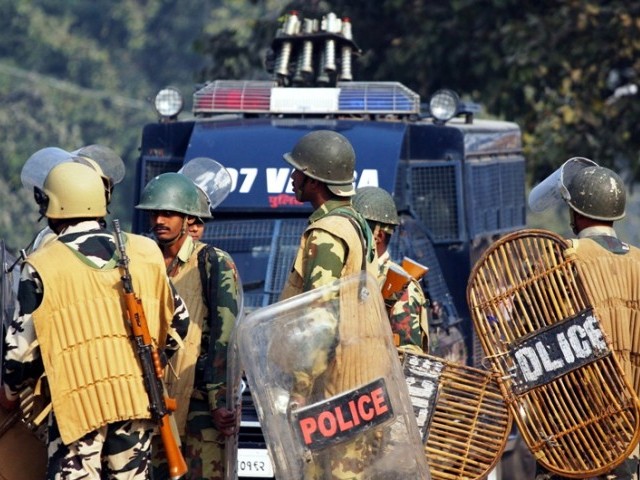 More than 2,000 people, mostly Muslims, were killed in clashes after Babri mosque was torn down on December 6, 1992. PHOTO: AFP

AYODHYA, INDIA: Indian security forces on Thursday flooded the northern town of Ayodhya where Babri mosque was demolished by Hindu zealots 20 years ago in a move that unleashed a wave of deadly religious riots.

More than 2,000 people, mostly Muslims, were killed in clashes in New Delhi, Mumbai and other cities after the Babri mosque in Ayodhya was torn down on December 6, 1992 by protesters seeking to build a Hindu temple on the site.

Opposing sides still wrangle over control of the tightly-guarded spot, with the Supreme Court last year suspending a ruling that divided it into three sections — one for Hindus, one for Muslims and one for a local Hindu trust.

At least 5,000 police were out in force in Ayodhya and surrounding areas of Uttar Pradesh state, with officers manning road blocks and monitoring key intersections to prevent any demonstrations.

Police and paramilitary troops sealed off streets to the disputed area, searched cars and enforced a magistrate’s order banning unlawful assembly on the anniversary of the demolition.

No rallies or unrest were reported during the day, which coincided with an official holiday commemorating B.R. Ambedkar, the chief architect of India’s 1947 constitution.

Amarnath Shastri, a retired advocate who lives in Ayodhya, told AFP that inter-religious tensions had calmed since 1992, though many Muslims still feel marginalised.

“Everyone now wants the town to develop, jobs to come up and industry to flourish,” he said. “People have realised that all such actions (in 1992) were wasteful.”

Hindu fundamentalists destroyed  the mosque because they said it was built by the Mughal emperor Babur on the site of a temple marking the birthplace of the Hindu warrior god Ram.

The destruction infuriated Muslims, who make up 13 percent of India’s population, and many feared the country was heading for an era of Hindu-Muslim bloodshed.

In the most serious outbreak of religious unrest since Ayodhya, about 2,000 people — mostly Muslims — died in riots in Gujarat state in 2002.