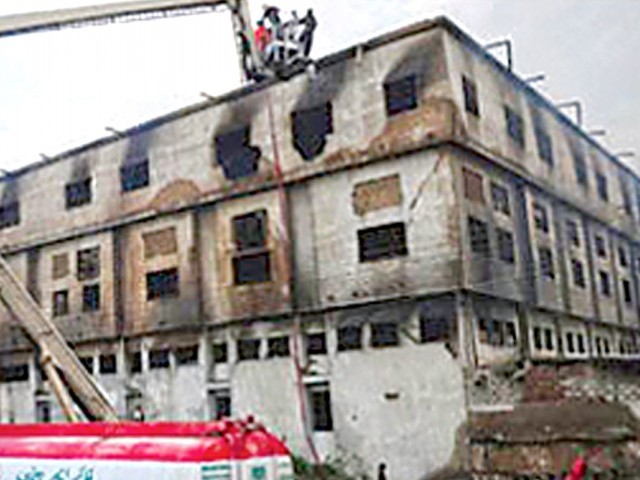 KARACHI: An electrical short-circuit may have been the initial cause of the Baldia garments factory that claimed the lives of more than 250 people but the “entire system” is responsible for the cause of deaths.

This is the crux of the long-awaited report of the Baldia factory fire tribunal which has been submitted to chief minister and home department.

From the setting up of the factory and its drawing plan, from meeting safety standards and the architects who did not make emergency exits, everything counts in the disaster, the report says while criticising the owners for fitting in maximum number of machines into minimum space.  “Not only the owners flouted the rules, officials of civil defence, labour departments were also negligent,” it stated.

The tribunal, headed by Justice (retd) Zahid Kurban Alavi and Khalilur Rehman Shaikh, also refers to several incidents of fire that broke out earlier at the factory, saying all fires were caused by power short-circuits.

Ali Enterprises did not store highly flammable chemicals and the condition of the generators or boilers did not suggest the fire started from there. The tribunal found no evidence against the allegations that factory doors had been locked, wrote Justice Alavi.

The fire started in the factory warehouse stashed with large cloth rolls meant for stitching and cutting of jeans and shirts. The rolls were wrapped in polythene material. The mezzanine floor was made of wood and the flames spread to other places from there. The exits on several floors were blocked by fire and in absence of any emergency exits, human lives were lost.

“We would indeed hold the entire system of Karachi responsible for the cause of death at each and every stage,” the tribunal stated while recommending registration of factories as necessary.

The current laws on fire protection are not clear and reference should be taken from the national fire project agency codes. Immediate surveys and inspections of factories by concerned quarters must be carried out to ensure safety measures, it was recommended. The Sindh government had constituted the tribunal on the next day after the blaze at Ali Enterprises on September 11.

End of an era: Abul Kalam to leave NED University after 16 years