Why snoozers are losers — the alarm clock handicap

Why snoozers are losers — the alarm clock handicap 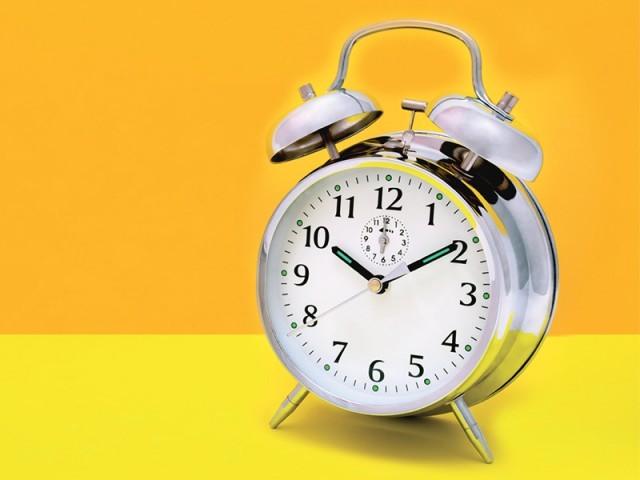 The dark side of alarm clock usage. DESIGN: SAMRA AAMIR

For most of us, mornings have become a time of grogginess, irritability and snoozing marathons. Not infrequently, the after-effects of such rough mornings pervade well into the afternoon and early evening.

Although there are a multitude of causal factors to why we no longer associate mornings with being fresh and alert, there is one very immediate culprit. And it has invaded our life from all corners. This intruder is the alarm clock.

The human sleep-pattern is characterised by cycles of approximately 90 minutes, with typically four to six such cycles repeated over the course of a night. Each sleep cycle, in turn, consists of different stages of sleep, which can be broadly looked at as two types: Non-Rapid Eye Movement (NREM) and Rapid Eye Movement (REM). In the earlier part of the night, NREM episodes in each sleep cycle (which include the most deep, restful sleep) are longer. As the night progresses, however, each sleep cycle will begin to be characterised by longer REM episodes, which is lighter sleep and includes the physiological changes that help the body move into wakefulness.

What is the importance of REM sleep?

REM sleep, in which long bouts of dreaming typically occur, functions to renew the mind. The learning process in the brain is actually very active during REM: information collected from the previous day is consolidated and new memories are formed. Students who prepare for exams the night before and don’t get enough sleep to incorporate long episodes of REM have repeatedly been shown to perform much worse than those who do. REM sleep will also replenish the ‘feel-good’ neurotransmitters in the brain, serotonin and dopamine. Anyone who’s recently experienced a spontaneous awakening after a full night of sleep will remember it can leave one elated for no apparent reason. Snoozing, thus, can be highly counterproductive.

More still, individuals who rely on alarm clocks to wake themselves prematurely every morning begin to accumulate sleep debt — a mechanism by which a region in the brain notes how many required sleep-hours are unmet. It then attempts to compensate for this through prolonged sleeping bouts later on. Not surprisingly, there has emerged the wide-spread custom of oversleeping on weekends.

How can one function without an alarm clock?

According to an article published in the BBC back in 1999, human beings have their own internal alarm clock system. This is because we begin to release a hormone called ‘adrenocorticotropin’ an hour before a spontaneous awakening. In fact, a study done at the University of Lubeck showed that, for individuals who regularly awoke at 9 am, and were then awoken three hours earlier one morning, the ones who had been informed of this plan the night before began releasing significant amounts of adrenocorticotropin by 5 am then. The researchers concluded that the element of anticipation pervades sleep and that “anticipatory adrenocorticotropin increase may also facilitate spontanteous waking.”

Blogs such as Mark’s Daily Apple and Clay Collins’ blog record experiments where they characteristically wake up within minutes before or after a planned time.

Even then, the takeaway message is not that alarm clocks have no use in the modern world. Indeed they are very useful instruments that aid in living independently when many people frequently experience a night of anxiety or sleep-deprivation. In an ideal morning, however, their use is best limited to that of safety-nets. And, in an ideal lifestyle, you may want to keep away from them altogether. Lest you become a loser.

The author is involved in a project called Scholars by Profession. Please visit their Facebook page for further details.