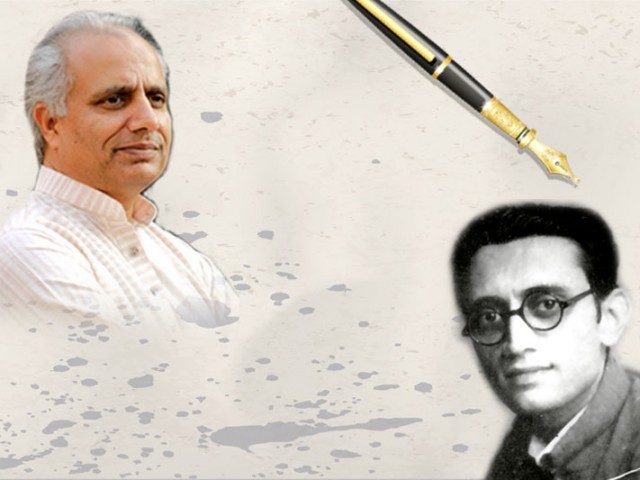 Urdu writer Saadat Hasan Manto who had published 22 collections of short stories, one novel, and five radio plays knew then that he would be remembered.

Like Allama Iqbal, he predicted that the same people who jeered at him would praise him in times to come, so he continued to show society its own reflection and wrote: “If you find my stories dirty, the society you are living in is dirty. With my stories, I only expose the truth.”

Although Manto was never convicted, he was tried six times for obscenity in his writings in India prior to 1947, and three times after migrating to Pakistan. In his short and poverty-racked life of 43 years, Manto wrote only what he believed in. “Manto could foresee what would happen, he told the truth,” says award-winning playwright Shahid Nadeem. “He showed that a writer should be closely linked to his society and that should reflect in his writing; in a creative way.”

Nadeem — also the Executive Director of Ajoka Theatre which works for social change — believes there hasn’t been enough focus on Manto’s work or his life. “We have only seen one-dimension in the mainstream, some people regard him as a pornographic writer who was banned not only by the courts but also by the society,” says Nadeem.

As this year marked Manto’s birth centenary, Nadeem and director Sarmad Khoosat teamed up to bring together “Mein Manto,” a drama serial for television audiences to rediscover the writer’s short-lived 43 years. “This is the first time that Manto’s life story is being presented alongside the socio-political conditions of the early ‘50s.”

Manto’s work has been the centre of Ajoka, that has performed many plays like “Toba Tek Singh” and “Naya Kanoun.” Nadeem has spent several months researching the script and exploring deeper into the records of those times.

“For Manto’s life and crisis, I had to meet people and look at some supporting material,” says Nadeem. “It was quite a difficult task gathering information about those times and the other characters.” He has weaved in Manto’s less popular stories inside the script of his life.

The story is about Manto and his migration as a relatively successful screenwriter from India, but a conflicted one in Pakistan. It was a time when the country had started to align itself with America, and the religious rights put a full-frontal attack on the ideology of Pakistan.

“The conservative forces really hounded him, and the progressive forces failed to protect him,” says Nadeem. “He came with high-hopes to Pakistan, but his hopes were dashed, he was not allowed to get a job. He applied for a permit for a printing press, but the authorities gave him permit for an ice factory; they wanted him to sell ice!”

Nadeem says that Manto had divided himself in two: Saadat Hasan and Manto, both showed different beings. He explains that Manto in his personal life was actually a clean family man, who liked to dress neatly, spend time with his family and help fellow writers.

In the script, Nadeem also included known writer Shaukhat Thanvi, who had been a darling of the establishment, yet he also fashioned his time as a ghost writer of pornographic material during the same era. This presents an antithesis to the troubles and tags that Manto faced despite being a reasonably successful writer at that time.

The serial will also uncover his underdeveloped relations at the time, with some of the Mumbai (Bombay) film fraternity and progressive writers.

“An interesting track in the story is that of Madam Noor Jehan and Shaukhat Hussain Rizvi, who were friends of Manto. They had also migrated to Pakistan and set-up Shahnoor Studio in Lahore,” says Nadeem. “The story will show some of the developments that took place in the new Pakistani film industry which started at the time; and the character of Noor Jehan will add colour to the serial without a doubt.”

The drama is still in its production phase but is anticipated to be aired in early 2013. Nadeem’s upcoming projects include another play on Manto for Ajoka, tentatively titled “Kuan hai yeh gustakh.” It is a line from Majeed Amjad’s poem about Manto.

He is also working on continuing Ajoka’s rebel Sufi series. He plans to write a play on the Sindhi poet Shah Inayat, who is considered to be the first socialist Sufi, and the Pakhtun saint Pir Roshnai.  Besides the theatre projects, Nadeem is currently writing a television drama serial called “Mahrani.”  It’s a political serial based on a lower-middle class housewife who accidentally enters into the world of politics and then becomes a leading political figure.