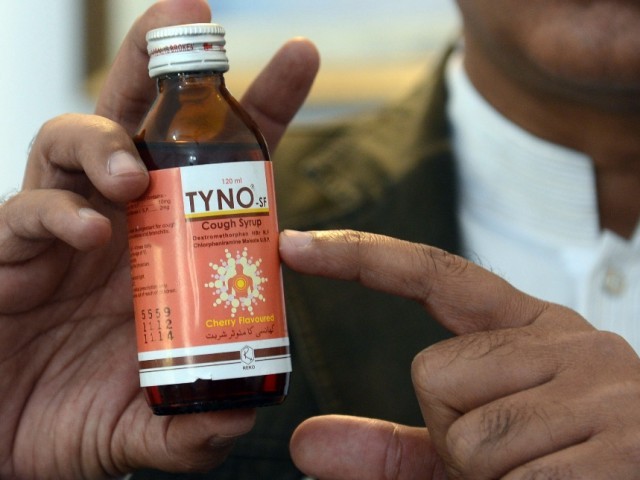 A Pakistani health official holds a bottle of toxic cough syrup at a hospital in Lahore on November 26, 2012. PHOTO: AFP

LAHORE: The Government of Punjab has imposed a ban on cough syrup Tyno, Express News reported on Monday. At least 16 people had died in Lahore after all of them had consumed the same toxic cough medicine.

All stock has been seized by the government and the factory has been sealed as well. There are reports that three men have also been arrested.

The deaths occurred in the Shahdra Town neighbourhood between Friday and Sunday with the victims mostly drug addicts who took the syrup to get high, said local police station chief Atif Zulfiqar.

“Some of the victims were found dead in a graveyard where addicts used to take different kinds of drugs,” he said. Seven others died in hospital.

Three pharmacies have been shut down and their owners arrested, he added.

Punjab Health Advisor Khawaja Salman Rafiq said the syrup would be confiscated from all pharmacies.

He said inspectors had shut down a drugs factory and sent samples to a laboratory for detailed analysis.

“Punjab chief minister Shahbaz Sharif has ordered an inquiry and a report will be submitted to him within 72 hours,” Rafiq said.

Doctor Tahir Khalil at Lahore’s Mayo Hospital said 20 victims aged 15 to 45 had been admitted after drinking the syrup and most had a history of addiction.

“One of the victims who was in critical condition died today and the total deaths in hospital are seven,” Khalil said.

“Six people were saved and were discharged after treatment, while seven others were still admitted to hospital,” he added.

The provincial Health Department had earlier submitted an initial report to Punjab Chief Minister Shahbaz Sharif regarding the cough syrup.

Sharif had ordered that the department look into the matter and submit a report within 72 hours. Following the orders, the authority raided 151 places and seized stock of the poisonous syrup.

The report states that none of the seized syrups were expired.

The police had arrested the owner of a medical store from where the cough syrup was obtained.

A murder case was earlier registered against the pharmaceutical company and pharmacy owners as well.

Cough syrup is often used for inebriation purposes and is sold as over-the-counter medicine at many pharmacies.