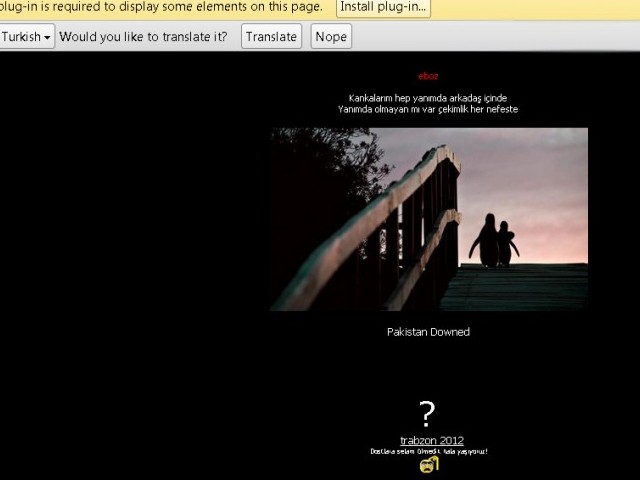 Google’s Pakistan page, along with hundreds of other .pk domains, was hacked and defaced early on Saturday. The hackers, who went by the name ‘eboz’, replaced Google’s logo with a picture of two penguins walking up a bridge at sunset.

Google is the most common search engine for surfers and news of the hack went viral early in the morning, providing perfect fodder for Pakistani bloggers and twitterati. The day started with countless blogs and tweets reporting the development.

Yes, google.com.pk, along with 284 other .pk domains, was hacked today, reported Propakistani, a technology blog based in Islamabad.

“The defacement was due to [the] change in DNS entries for 284 .pk domains that are managed by MarkMoniter,” said a blog post quoting Irfan Ahmed, an expert on Pakistani websites and web-servers.

Under normal operations, people accessing Google from Pakistan are redirected to Google.com.pk. However, after the defacement, they were directed to the international page.

No one has claimed responsibility for the defacement of the domains. However, according to most bloggers, the hackers left a message in Turkish on the vandalised Google page. ‘Pakistan Downed’ was the only English phrase in the entire message.

So far, The Express Tribune has been unable to contact Google’s country consultant, Badar Khusnood, or Haseeb Shaukat of Microsoft, due to the suspension of cellular services.  Emails sent to both have not been answered yet.