US defends Israeli attacks on Gaza at emergency UN meeting

US defends Israeli attacks on Gaza at emergency UN meeting

Arab nation­s wanted the counci­l 'to condem­n that barbar­ic attack' by Israel while US strong­ly defend­ed its key ally.
By AFP
Published: November 15, 2012
Tweet Email 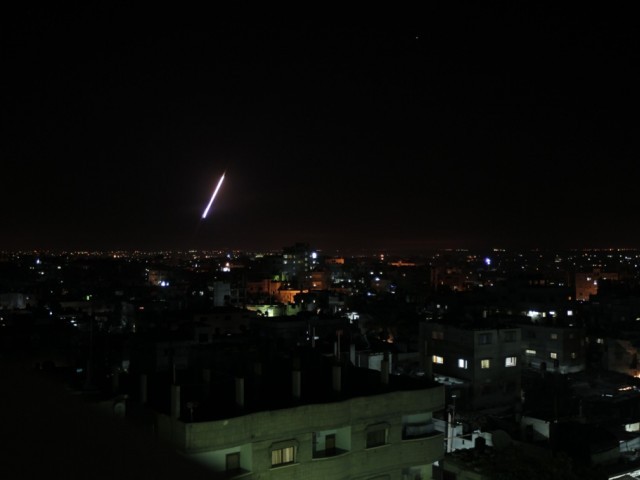 A rocket is launched from Rafah, in the southern Gaza strip towards Israel, on November 14, 2012. PHOTO: AFP

The 15-nation council did not condemn either side after the 90 minute meeting. Hardeep Singh Puri, India’s UN envoy and Security Council president, said: “All the statements that I heard resonated with one message – that the violence has to stop, there has to be de-escalation.”

Arab nations wanted the council “to condemn that barbaric attack” by Israel and “send a strong message to call for a cessation of hostilities,” said Sudan’s UN envoy Daffa-Alla Elhag Ali Osman, chairman of the Arab bloc at the UN.

The United States strongly defended the actions of its key Middle East ally however.

Highlighting Israel’s claim that at least 768 rockets have been fired from Gaza this year, US ambassador Susan Rice told the council: “Israel, like any nation, has the right to defend itself against such vicious attacks.

“There is no justification for the violence that Hamas and other terrorist organisations are employing against the people of Israel. We call on those responsible to stop these cowardly acts immediately.”

Rice, a frontrunner to become the next US secretary of state, said the rocket attacks were harming efforts to end the Middle East conflict and create a Palestinian state.

“Hamas claims to have the best interests of the Palestinian people at heart, yet it continues to engage in violence that does nothing but set back the Palestinian cause.

“Attacking Israel on a near daily basis does nothing to help Palestinians in Gaza nor to move the Palestinian people any closer to achieving self determination and independence,” Rice said.

Only the Palestinian and Israeli ambassadors were allowed to address the meeting on top of the council envoys.

Palestinian envoy Riyad Mansour told the council that a child of 11 months, two other children and a pregnant 19-year-old woman were among at least nine dead from the attacks.

“Death, destruction, trauma and terror are being rained upon our people before the eyes of the world,” Mansour said.

“The international community must act to bring an end to Israel’s illegal policies and practices against the Palestinian people,” he added.

Mansour said the attacks were linked to the Palestinian application for observer status at the United Nations, which is due to be voted on by the UN General Assembly on November 29.

Israeli Prime Minister Benjamin Netanyahu has warned that the military operation could be expanded and the country’s UN ambassador Ron Prosor said: “The goal of Israel’s operation is clearly defined – to remove a strategic threat to Israeli citizens.”

He told the council that Israel will not play “Russian roulette with the lives of our citizens.”

“Hamas has turned Gaza into a haven and a breeding ground for global terrorist organisations,” Prosor declared.

The Palestinian envoy said that if the council could not halt Israel’s attacks, the Palestinian Authority would come back and demand a formal condemnation of Israel.

He said this could include proposing a resolution, which the United States would almost certainly veto. The US administration uses its powers as a permanent member of the UN council to block any resolution condemning Israel.

Pakistan strongly condemned Israel’s anti-Palestinian offensive in the Gaza strip during the UN Security Council meeting and urged the council to demand an immediate cessation of its military actions.

“Grave developments today in Gaza portend to threaten international peace and security. The council must play its part in arresting this trend,” he said.

Masood Khan said that the excessive use of force by Israel on peaceful protesters in a number of Palestinian cities was unacceptable.

“Israel should exercise restraint. The firing of rockets from Gaza should also stop… The international community should step in. The Security Council should ensure that hostilities cease forthwith and further escalation is arrested, without caveats and qualifications,” he said.