Attack on Rangers a link in the chain?

Attack on Rangers a link in the chain? 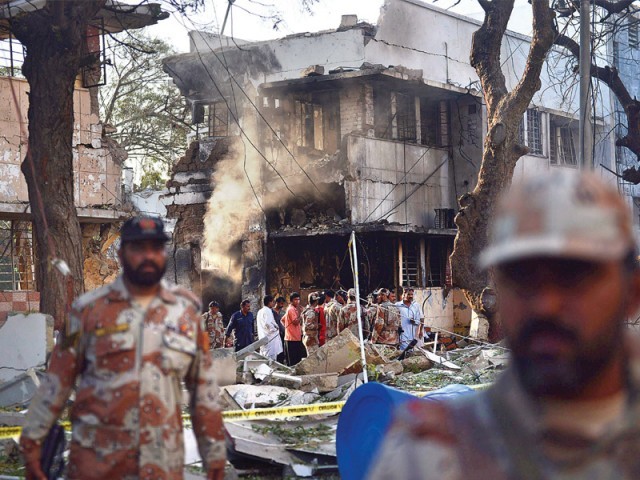 Security and rescue personnel seen at the scene of a suicide bomb attack at the Rangers complex in Karachi. A suicide bomber rammed an explosives-laden pickup truck into the gate of the complex on Thursday, killing three Rangers and injuring 13 soldiers. PHOTOT: AFP

KARACHI: Thursday’s “suicide” bombing at the Rangers complex in North Nazimabad was the fifth deadly attack on paramilitary soldiers in Karachi within a span of just 11 months. Another five potential threats targeting Rangers have been averted within the same period, all of which seem to have taken off soon after the killing of Moeed Abdul Salam – reportedly an al Qaeda operative, who was killed in a Rangers raid at a Gulistan-e-Jauhar apartment last November.

On Thursday, at least three Rangers were killed and 13 more were wounded when a suicide attacker rammed a mini-truck laden with explosives into one of the entrances of a residential complex housing the personnel of Pakistan Rangers’ Sacchal wing.

Investigators believe that this attack and a similar suicide bombing at the Crime Investigation Department’s complex on November 11, 2010, are linked to each other and are the handiwork of the same militant group or groups.

The banned Tehreek-e-Taliban Pakistan, al Qaeda and Lashkar-e-Jhangvi’s Naeem Bukhari group were stated to be involved in the attack on CID head office that claimed seven lives and wounded several others. A few alleged terrorists were apprehended but there have been no breakthroughs two years on, as the masterminds have yet to be arrested and investigators have failed to trace out the owner of the vehicle used in that attack. Similar to the Shehzore truck used in the CID office attack, the Rangers complex was also targeted by a vehicle of the same model.

“In Karachi, Lashkar-e-Jhangvi’s Naeem Bukhari group is the most active right now,” CID (Operations) SSP Fayyaz Khan told The Express Tribune. “They have direct links with the Taliban and al Qaeda also.”

In a one off attack, a Rangers van was targeted near the AO Clinic in Nazimabad about three years ago. The blast left several paramilitary soldiers injured. Police had then arrested some men from the outlawed Jundullah over their alleged involvement.

Since December 2011, however, Rangers in Karachi have been repeatedly attacked. In the first attack, three Rangers were killed and four more were wounded when a roadside bomb exploded near their patrolling vehicle on University Road near Safoora Chowrangi on December 8 last year.

Only a day after the blast, another Rangers van narrowly escaped a low-intensity bomb outside the University of Karachi. A passerby was killed and several others were injured in the attack.

On July 16, three Rangers and a factory watchman were injured when a remote-controlled bomb planted near their van went off in Quaidabad. On the same day, a 12-kg bomb was defused near the Sacchal wing headquarters on Karachi-Hyderabad highway.

Two days later on July 18, a motorcyclist was killed and six, including four Rangers, were wounded when planted explosives exploded near a patrolling vehicle in Buffer Zone, North Nazimabad.

On July 20, police defused a bomb weighing 16 kilogrammes planted near the Safoora Chowrangi on University Road.

Only July 23, another Rangers officer and a passerby were hurt as a bomb planted on a motorcycle exploded near the Chinese Consulate in Clifton. On the same day, another bomb was defused just a few feet from the Rangers mobile parked near the Chinese Consulate. Another four-kg bomb targeting the paramilitary soldiers was defused on November 1 near the Kiran Hospital in Gulistan-e-Jauhar.

Moreover in Karachi, at least five Rangers, including two intelligence officers, have so far been shot dead in targeted killings this year.

Men linked to Moeed Abdul Salam are behind the attacks targeting Rangers as they have damaged the terrorists’ organisational network by arresting several of their men in Karachi, investigators suspect. “Most of the suspected terrorists are detained at the same Rangers complex where the attack [on Thursday] was carried out,” says an officer privy to the matter.

The Rangers spokesman says these “cowardly” acts of terror cannot deter the Rangers resolve to continue with operations against militants with full force. He did not, however, respond to a query about who did he think was behind the attacks on Rangers or their links with each other. “All of this would be cleared in the investigation,” he said.