The singer-compos­er talks about the sudden popula­rity of the new song.
By Rafay Mahmood
Published: November 6, 2012
Tweet Email 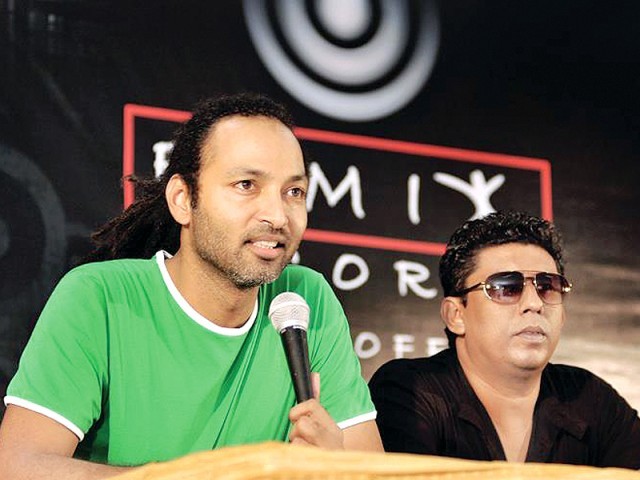 The channel had more hopes for “Isabel” but surprisingly, “Ishq-e-Mamnoon” has captivated a larger audience. PHOTO: PUBLICITY

Little did we know that the Urdu dubbing of popular Turkish soaps will gain so much popularity in Pakistan. After the national obsession with “Humsafar”, Pakistan’s latest addiction is the widely popular Turkish soap “Ishq-e-Mamnoo” (Forbidden Love).

While its lead characters Bihter and Behlul have become household names, the singer of the namesake original soundtrack has become something of an overnight celebrity.

Khurram Jamshed, also known as KJ, shares success similar to that of Quratulain Baloch, who is now enchanting people around the world with “Woh Humsafar Tha”. KJ is being advertised for ghazal nights as the singer of the hit title song “Ishq-e-Mamnoo”.

Little do people know that KJ has been behind the scenes in the music industry for almost 20 years, providing services for different record labels and music companies. It was only recently when KJ was supervising the dubbing of Turkish soaps “Isabel” and “Ishq-e-Mamnoo” with his partner and project head Emu, that he was chosen to sing.

“I was a little hesitant to sing after so long, but Emu [also the composer of the song] pushed me into it,” KJ told The Express Tribune. “Now I realise that it was a risk worth taking.”

In the mid ‘90s, KJ entered the music industry to become a singer but the rejection from PTV and other record labels forced him to go behind the scenes and focus more on artist selection and promotion for record labels.

“It is more like a dream come true for me,” explains KJ. “For years I have been promoting other people and for the first time I am getting to do something solo and live.”

Keeping the popularity of the song in mind and the increasing demand by the promoters for a legally downloadable version of the song, KJ decided to make a solo video which will be released soon.

“We thought that the ban on YouTube might affect our gauge of the song’s success,” says KJ. “But the back-to-back demand on different radio stations is very encouraging. It’s also very interesting that people have come out with their own remix versions of the song.”

The whole project was experimental, but Emu, who is also a Fuzon band member, followed his gut feeling about the composition. He asked one of his colleagues, singer and lyricist Sherry, who was also supervising the dubbing project, to come up with the words.

“It had to be a romantic song with a very mellow feel to it,” says Emu. “But it was about forbidden love so I added a bit of a qawwali to it which really worked out in our favour.”

Being a rockstar and the face of a prominent band, Emu wasn’t comfortable with the whole concept of composing an OST. “Changing shoes wasn’t that much of a treat,” says Emu with a laugh. “However, I wanted to tell people that Emu is more than Fuzon.  If someone wants me to compose an OST for them, I will. But I won’t go beg people for an OST, because that’s not what I am known for.”

Ironically, the channel had more hopes for the play “Isabel”, which was the reason they aggressively advertised the soundtrack for that serial, but surprisingly, “Ishq-e-Mamnoo” has captivated a larger audience.

Correction: An earlier version of this article misspelled Mamnoo as ‘Mamnoon’. The error has been rectified.