As the proces­s become­s cheape­r liquid fuels from gas or coal could be the answer to Pakist­an’s energy woes.
By Khurram Baig
Published: November 5, 2012
Tweet Email 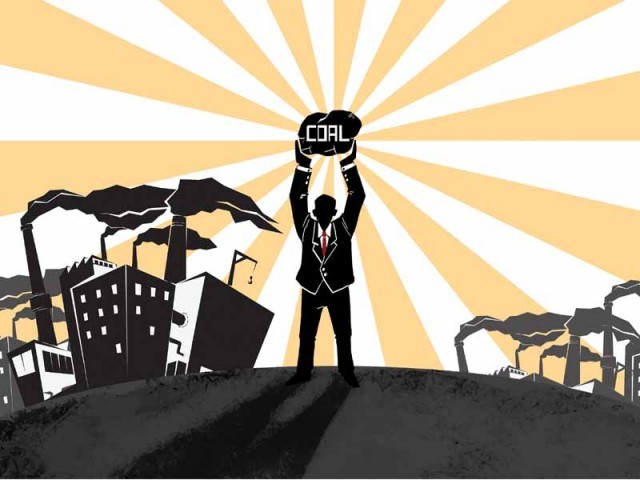 Liquids from coal and natural gas are similar. The first step in either process is to turn the hydrocarbon fuel into a gas consisting of hydrogen and carbon monoxide. LLUSTRATION: JAMAL KHURSHID

Pakistan is an energy-deficient country. At least based on the current supply and demand basis, it is. The potential to produce energy is there, and if Pakistan can produce even a fraction of that potential, it would become an energy surplus country. Something that can be achieved with some planning, some positive intent, a bit less political interference and some innovative ideas.

It is these innovative ideas that might be one of the solutions to Pakistan’s energy problems. For example according to a recent media report Qatar Airways is scheduled to open a new airport with many amazing facilities. But the most extraordinary feature, from an energy standpoint is that it will pump airline fuel made from natural gas.

Qatar has oil, but what it really has loads of, is gas. But while oil can easily be transported, moving natural gas is much harder. To get around this problem Royal Dutch/Shell built a gas-to-liquids plant called Pearl that makes a variety of liquid fuels.

But obviously, as innovative as this approach is, it is not going to work for Pakistan, because gas is the issue. So, we take another innovative energy conversion example, this time travelling to South Africa, where international sanctions during the apartheid regime forced them to think out of the box. It was driven to make liquids from coal in the days when its apartheid regime faced trade sanctions and the country could not import oil.

The process of ‘cooking’ coal into liquid fuel has already proven itself on a massive scale. Take coal, add some water, cook it, and you’ve got a liquid fuel for your car. The hydrogen in the water bonds to the carbon and voila: hydrocarbons, such as octane. It’s the very fact that coal-to-liquids (CTL) could work that make them such a scary idea for people devoted to fighting climate change.

The Germans managed to provide up to half of their transportation fuel needs during World War II using CTL. Later, South Africa began a major coal-to-liquids program during the Apartheid era and now maintain the world’s largest CTL industry in the world. The country’s factories produce 160,000 barrels of fuel a day. This includes both diesel and jet fuel from coal because it makes economic sense. About 30% of the country’s transport fuel is produced using CTL technology.

Now this makes also much more sense for Pakistan, because of the extremely large reserves of coal lying untapped in Thar. Let’s for arguments sake accept the governments claims about the size of the reserves.

Liquids from coal and from natural gas are similar because the first step in either process is to turn the hydrocarbon fuel into a gas consisting of hydrogen and carbon monoxide. From there, further chemical processing yields hydrogen and carbon combinations that are liquid at room temperature.

However one significant drawback for an economy of Pakistan is the fact that the process of making fuel from natural gas is extremely costly and energy-intensive which negates some of the benefits. It also requires significant quantities of water. But advances in technology are reducing both the cost and the water requirements.

And the increased carbon footprint could get it into trouble with potential markets like the EU. There is hope, however. SRI International, a private research facility in the US which does work for the US government as well is developing a process that combines coal and natural gas to produce liquid transportation fuels that it says are substantially cleaner and cheaper to make than existing synthetic fuels.

SRI claims its process addresses three liabilities that have slowed the commercialisation of the technology. By blending some natural gas into the conventional CTL process, the private research lab, based in Menlo Park, California, claims to have eliminated CTL’s carbon footprint, slashed water consumption by over 70 percent – another scarce resource in Pakistan – , and more than halved its capital cost.

China has also explored this technology and the world’s largest CTL facility outside South Africa – Shenhua CTL – is in China, producing approximately 20,000 barrels per day of liquid fuel from coal.

Shenhua CTL, also known as Erdos CTL annually processes 3.45 million tons of coal into 1.08 million tons of oil, including 720,000 tons of diesel oil, using direct CTL technology which it claims eliminates the need for -3-stage conversion used in South Africa. The project which came into full production in 2010 announced its first profits last year. According to Shenhua sources, the technology is profitable if crude oil prices stay above $35 a barrel. They are currently over $100 per barrel

With oil prices rising, CTL technology could be the next best option. Researchers from MIT Joint Program on the Science and Policy of Global Change concluded last year that CTL technology would be a cheaper alternative for two types of regions, or economies. Those that have abundant reserves of coal, and those that have a largely weak climate policy. Pakistan appears to fit the bill on both counts.