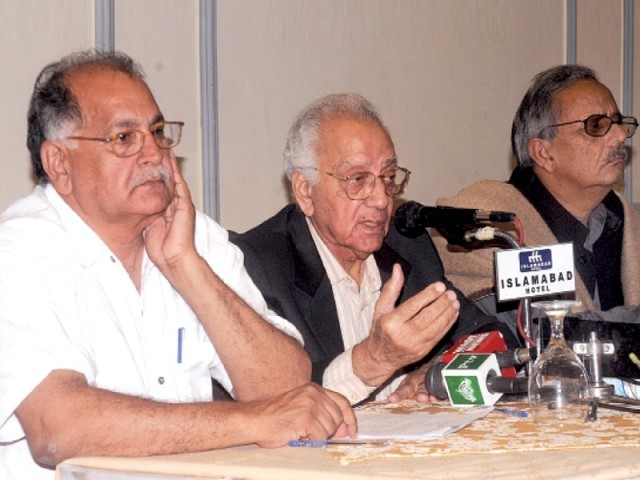 Leaders of the new party at a press conference. PHOTO: ZAFAR ASLAM/EXPRESS

The merger of three progressive parties has brought a new political alternative on the horizon for Pakistan’s masses.

At the press conference announcing the merger, LPP leader Farooq Tariq said the founding conference of the AWP will be held on November 11 at Aiwan-e Iqbal in Lahore.

“A break from the diktats of multinational capitalism and imperialism in all its forms, replacing existing oppressive state institutions with fundamentally democratic ones and better relations with neighbouring countries are among the new party’s immediate objectives,” said Tariq. The party will also work towards establishing a genuine federal system and to end feudalism in Pakistan with fair land distribution.

Abid Hassan Minto, a Workers Party Pakistan leader and constitutional expert, said even though myriad questions are being asked about the performance of the Pakistani state today, there is no clear-cut state policy to tackle problems faced by the public.

“Exploitation, financial corruption, profiteering and land-grabbing are all part of the status quo,” he said. “People are searching for an alternative system.”

Responding to a question about how this merger is different from ones in the past, Minto said there is no ready-made formula for the success of a political party, but experience is an important asset. He said debate and discussions are crucial towards political activity and the party will try to promote discourse in the society and improve on the past experiences of left-wing parties.

Minto said the Awami Workers Party will try to achieve an alternative system by mobilising the masses.

“It’s not easy to change things, but these challenges can only be fought with public power,” Manto said. “People are the solution.”

Minto said they are presently more focused on forming the party and contesting the upcoming elections is not a high priority.

However, the party will contest on a few seats.

“We will be contesting the elections from 40 to 50 constituencies, mostly in Khyber-Pakhtunkhwa,” Fanoos Gujjar, central president of the Awami Party Pakistan, said. Gujjar said the Awami Workers Party plans to name female candidates in constituencies which have historically been won by feudal lords.

Gujjar said, “Although our objectives might sound similar to other political parties, the difference is that our leadership is from among the masses, not from among the feudals or capitalists, and we want to empower the common people.”

Farooq Tariq, leader of FPP, said that in their individual capacities, the three parties have recently worked with the Okara peasants’ movement and the Faisalabad loom workers’ movement, and the AWP will continue in the same vein to support trade unions, peasant movements, minority rights and women rights.

He said AWP will support the National Students Federation (NSF), which has upheld the left-wing tradition among students in Pakistan, and also work with students to combat religious fanaticism among the younger generation. Rafiq Malik, a party worker, said the AWP will also have its own youth wing.

Responding to a question, Minto said the AWP will support the creation of new provinces and the right to self-determination for all ethnicities.

The press conference was attended by party workers and members of the civil society, some of who seemed quite upbeat about the new development.

“The creation of this party is a welcome change,” said Samina Nazir, executive director of the Potohar Organisation for Development Advocacy. “People who think and want to vote in the elections don’t have any alternatives to mainstream political parties. This party might just be that alternative,” she said.