Struck down?: Imran Khan offloaded from US bound flight in Canada

Struck down?: Imran Khan offloaded from US bound flight in Canada

Khan was questi­oned for half an hour by US immigr­ation author­ities over his stance on drone strike­s.
By Web Desk / Huma Imtiaz
Published: October 27, 2012
Tweet Email 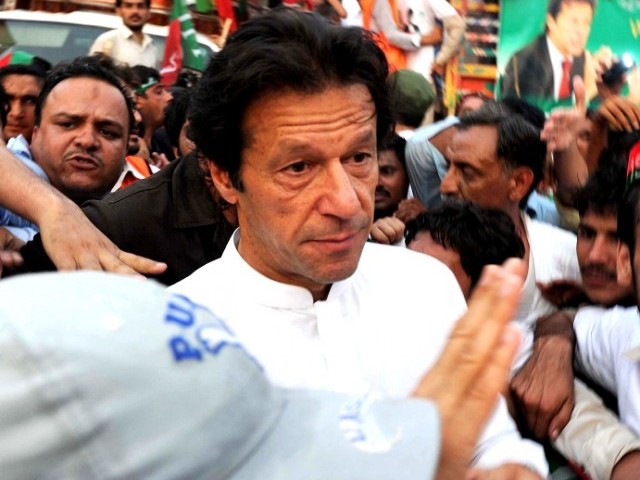 PTI chief is on a fundraising tour of US and Canada. PHOTO: AFP/FILE

Khan, who has been on a fund raising tour for his party in Canada recently, was travelling to the US to hold meetings with party members and raise further funds for the PTI as elections near.

US State Department spokesperson Laura Lucas told The Express Tribune, “We are aware that Imran Khan was briefly delayed in Toronto before boarding the next flight to the United States. The issue was resolved. Mr Khan is welcome in the United States.”

“I was taken off from plane and interrogated by US Immigration in Canada on my views on drones. My stance is known. Drone attacks must stop.”

Express News added that Khan was questioned for half an hour. US immigration officials also reportedly called the PTI chief a ‘supporter of Taliban’ .

Khan responded that he was not against the US, but opposes some of its policies.

In a subsequent tweet the former Pakistan cricket team captain said that he had missed his flight and will also miss a planned fund raising event in New York.

“Missed flight and sad to miss the Fundraising lunch in NY but nothing will change my stance. Still looking forward to meet PTI family there.”

The Toronto Sun had reported on October 18, 2012, that PTI aimed to raise $50,000 from a fund raising dinner which, PTI Canada president Khawar Chaudhry hoped would draw at least 1,500 attendees.

As news of Imran Khan’s offloading and subsequent questioning spread, twitter, where a lot of Khan’s supporters and detractors share their opinions, took to picking apart the incident or supporting their leader.

Here are what some of the people tweeted in the aftermath of the the incident.

Imran Khan shouldn’t be allowed to enter the US. Enough said.

I am not from #PTIbut I think I have sympathies with Imran Khan especially when he acts like a Hero..@ImranKhanPTI

#ImranKhanis not only a politician but a great humanitarian. He doesn’t deserve to be randomly stopped & questioned by #USOfficials

As per Govt treaties, US immigration sits at Toronto airport to pre-screen all travelers to USA. Imran Khan and his team was held by them.

I am Imran Khan and I am in the hearts of 180 million of Pakistanies!#PTI

I wonder what would be govt, stance over the issue of Imran khan offloading from plane at Toronto Airport

Imran Khan’s last interview to CBC. This may have led to the Canadian authorities going on alert & offloading himhttp://www.cbc.ca/news/politics/story/2012/10/25/imran-khan-interview.html …

#WikiLeaks showed that IMRAN KHAN is leader who is true to Nation & say same thing of USA which he says in Public. Today it was proven #PTI