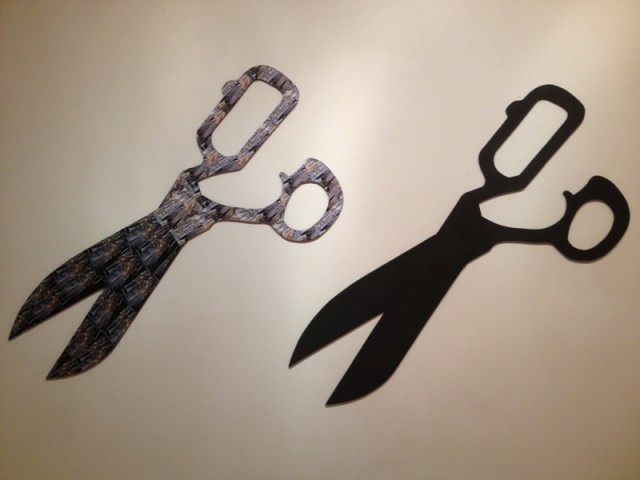 The ‘experimental’ work, produced over eight month as a result of talks held amongst the artists, includes paintings, sketches and photographs.

Explaining his work, the photographer said he had tried to show women engage in distinct evocative behaviour.

One of the photographs shows a girl getting off a rickshaw adjusting her shirt. Another photograph shows a woman publicly flossing her teeth, while another carefully fixes her shawl before boarding a rickshaw.

Ghani, a professional photographer for 14 years, told The Express Tribune, “I believe every individual has a touch of glamour, but we tend to ignore it when in public. I took these photos after waiting for the right moment.”

Maria Khan’s Tough Cascade consists of mix media on acrylic. She says the transparent sheet has been used to create a relationship between the painting and its contrasting background. Liquid paints and ink give it a waterfall-like appeal.

“It is not a conceptual piece,” she says, adding, “It’s an abstract that gives me space to experiment with various mediums and explore the relationship between a painting and its background.”

Hassan Sheikh, a second year painting student at the NCB&A, had displayed photographs cut and then collaged to form a scissors-like piece. Next to it is a similar installation, but in black, perceived by some as ‘dark and negative’ and praised by some for its distinctive appearance.

Sheikh said, “It is about striking a balance between a strong pictorial composition and a bland one.

I was taking pictures and decided to incorporate two very sharp images of scissors to make a scissors installation,” he said.

Abdullah Qureshi, owner of 39-K, appreciated Adnan’s work. He said the artist had used lines repetitively to link experience with time and space.

“It portrays his insights of a location he holds close,” he said.

Qureshi himself has also displayed six of his works – five paintings and an installation.

It comprises mostly colour contrasts splashed on canvas, standing out for its bright colour.

“It’s a dialogue between the representational and the abstract …I think my work makes a strong statement about my mood,” he said.

Qureshi, a graduate from the Chelsea College of Art and Design, UK, has been running the gallery at his parents’ house for five years.

A series of photographs by Rabbania Sharjeel is also on display. It comprises three images of light rays travelling through space – disposable cups containing tea bags – and then more light rays.

“This is meant to give a feel of…taking a break for tea, Qureshi said.

He said the show was meant to focus on experimental approaches towards art.