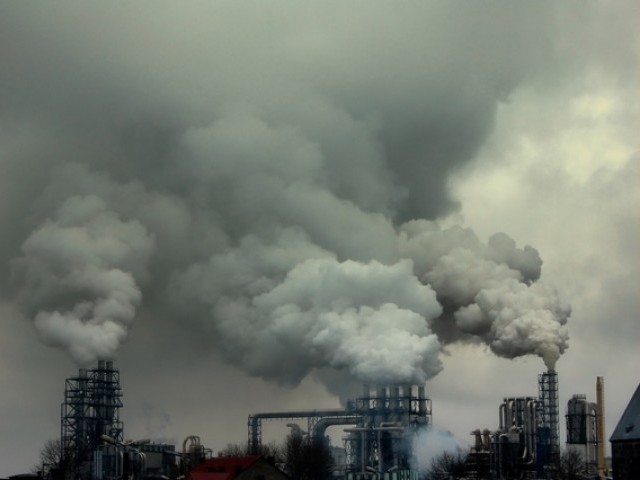 Environment Protection Department officials have said that they need far more inspectors and powers to penalise smoke-emitting vehicles in order to bring down levels of air pollution.

Lahore Transport Company inspectors, motor vehicle examiners deputed by the Transport Department, Traffic Police and EPD officials are currently engaged in a campaign to fine unfit vehicles. Four teams of four officials each are deployed in the city once a week to catch smoke-emitting vehicles and they have fined 3,021 since the current drive was launched on July 3. Some two-thirds (2,070) of the fines have been handed out to motorcycle rickshaws; 82 pickup vans, 324 four-stroke rickshaws and 295 trucks have also been fined. The teams work in rotation and are deputed at Peco Road, in Garhi Shahu, outside Data Darbar, at Azadi Chowk, at Gaddafi Stadium and at the intersection of Walton Road and Ferozepur Road.

An LTC inspector told The Express Tribune that he had seen many rickshaw and truck drivers get fined twice, but that do nothing to fix their engines so they do not spew out high levels of pollutants. He said that the penalty was not heavy enough.

Violators are fined under Clauses 13 and 14 of the Motor Vehicles Ordinance of 2002 upon violating Section 15 of the Punjab Environment Protection Act of 2012.

The Lahore High Court ordered the Punjab government to check vehicle fitness after a bus carrying school children crashed as a result of an unfit engine near Kallar Kahar last year, killing dozens of students. The campaign was held up for a while because officials were engaged in the anti-dengue campaign. The chief minister ordered the drive be restarted in July.

Maqsood Ahmad Lak, the director general of the EPD until a week ago, said that the checking teams had been instructed to stop smoke-emitting vehicles as a priority. He said that vehicles using pressure horns were a lower priority.

EPD Secretary Saeed Iqbal Wahlah said that there were millions of vehicles in the province and there were only 16 EPD inspectors. Half of these were engaged in the anti-dengue campaign, he said. Only two could be spared on one day per week to conduct inspections.

In 2010, a separate wing for vehicular pollution control was set up by the EPD. It is headed by EPD Assistant Technical Director Azmat Naz. She said that the department had been checking unfit vehicles before the Kallar Kahar tragedy as well.

She said that though Section 15 of the PEPA dealt with vehicular pollution, it did not specify fines or penalties for exceeding emission limits for different types of vehicle. She said that the EPD did not have the authority to impose fines. “That is done by the traffic wardens or motor vehicle examiners sent by the Transport Department,” she said.

“We have to pressure these departments. We write several letters to the police and the Transport Department to send in a squad which can accompany the EPD inspectors. Sometimes a day’s activity has to be called off because they back down at the last minute,” she said.

Naz said that the EPD had only two inspectors, deployed once a week, for the job in Lahore. “In most districts, there is zero checking,” she said. She said she would like to see eight inspectors in Lahore so they could check vehicles for at least four days a week.

She said that the problem of high vehicular pollution would remain until there was a stronger check on vehicle manufacturers and assemblers in Pakistan. She said that motorcycles, rickshaws and pick up vans and all sorts of engines were being imported to Pakistan.

Though the LHC had in 2006 ordered the government to ensure that vehicles manufactured in Pakistan complied with the Euro-II emissions standard, this was not the case.

“Now most countries are making Euro-IV vehicles,” she said.

Naz said EPD inspectors should be given the power to check and fine vehicles. She said that if EPD inspectors were given dynamometers to check engine fitness and were trained, they could do the job on their own.