Human fortresses on the outskirts of Peshawar

Human fortresses on the outskirts of Peshawar

On the outski­rts of Peshaw­ar, reside­nts are taking securi­ty into their own hands.
By Iftikhar Firdous
Published: September 1, 2010
Tweet Email 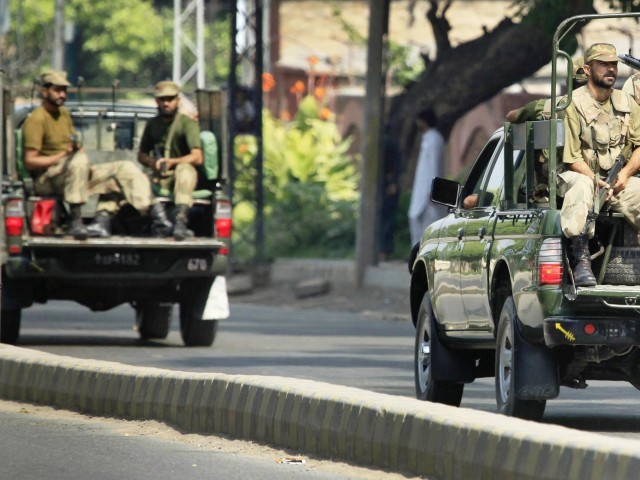 Analysts and observers have long believed that Peshawar cannot be safe unless the boundaries of the city are secured. PHOTO: REUTERS

MATANI ADEZAI: On the outskirts of Peshawar, residents are taking security into their own hands, in the form of tribal militias, or lashkars. This unofficial security apparatus has long been a source of controversy in both Pakistan and Afghanistan.

Analysts and observers have long believed that Peshawar cannot be safe unless the boundaries of the city are secured. It was for this reason that 75-year-old Gul Abbas joined a lashkar raised against militants that has been attacked on several occasions. But, Abbas says, he will not back off even if he has to sacrifice his life.

“The lashkar only grows stronger if any of us, young or old, is martyred,” Abbas says. “We are like a fortress. We are adamant in our cause and our lands and children are ready to be sacrificed for it.”

Even in the scorching summer of Peshawar, this elderly man is mindful of his duties.

The lashkar was formed in 2008 and first came under attack when its first leader Abdul Malik was assassinated. But militants have now changed their strategy and have started attacking the members of the lashkar. Thirty members, including two high-ranking ones, have been killed so far.

Although determined, the members do fear for security. Fifty-year-old Abdul Raziq complains of lack of assistance from the government. “We are fighting on the front line but we lack the resources to stop the militants completely,” he says.

The government says that it is doing its best to help the lashkar but they have massive financial problems. The floods have only aggravated the situation.

“We are supporting the peace lashkar and understand their problems. We will try to come up with a solution too, very soon,” Khyber-Pakhtunkhwa Information Minister Mian Iftikhar Hussain said.

The lashkar’s cause, however, is larger than life for those involved. Israr Khan, who was killed in an explosion last week, has left behind a family not embittered at all by his death. His children have accepted him as a martyr and hope that one day, his sacrifice will bring peace to their village.