Attack on church: Amid reservations by some, police registered blasphemy case

Attack on church: Amid reservations by some, police registered blasphemy case 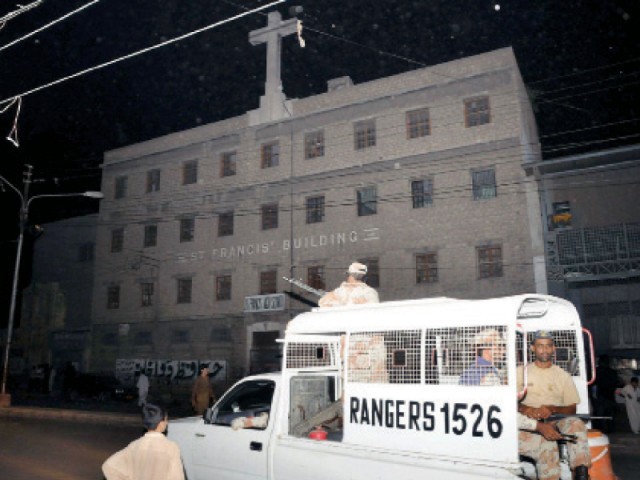 The St Francis Church, which has already been attacked twice, was vandalised on Friday after people protesting against power outages pushed broke in. PHOTO: FILE

Less than two weeks after a blasphemy case was registered against those who damaged a Hindu temple, an FIR has been filed against the mob that attacked a Catholic church.

Around 200 people, who were protesting against power outages in Old Haji Camp, pushed open the gates of the St Francis Church on Friday. After breaking in, they reportedly desecrated the holy books and damaged St Mary’s statues in the church.

The Napier police station registered a case on Saturday under section 295-A of the Pakistan Penal Code (‘deliberate and malicious acts intended to outrage religious feelings of any class by insulting its religion or religious beliefs’) along with other charges of looting, vandalism and theft, against the protesters. The FIR was registered on the complaint of Reverend Father Jamil Albert.

The Pastor of the church, Reverend Father Mohan Victor, said using section 295-A in the FIR was a difficult task as the police were reluctant. “For over two hours, our lawyer and religious leaders kept arguing with the police. Finally they gave in.” But no one has been named in the FIR since Father Mohan said that they could not identify the attackers. SHO Aslam Gujjar, however, denied that the police was unwilling to register a blasphemy case. “I felt the case had to be registered because the attack was on a house of worship,” he said. “It doesn’t matter which religion it belongs to.”

NGOs and leaders of the Christian community have expressed different opinions on registration of the blasphemy case. Activist Zahid Farooq said that some of the Church leaders do not endorse the blasphemy law and do not want it to be used for their community.

“If we use this law ourselves, then we won’t be able to protest against its misuse,” said Noel Alfonce of the National Commission for Justice and Peace.

The attack, which is the third one on the St Francis Church, has left the community in fear and confusion. Father Mohan said that they could not understand the connection between power outages and the attack on their church.

“We were all busy in the evening prayers when we heard loud noises at the gate.” Soon stones were hurled on the church and sensing danger, the 200 worshippers took refuge in the upper section of the church. Downstairs, the mob reportedly vandalised the church property. The crowd dispersed after police resorted to aerial firing.

Meanwhile, members of the Christian community and their religious leaders protested against the attack on the church outside the Karachi Press Club on Saturday.

Archbishop Joseph Coutts said that people who participate in such attacks have no religion of their own. “These attacks are carried out by terrorists who don’t have any faith of their own. We demand the government to provide security and protection to our churches.”

MPA Saleem Khokhar Khursheed said being a minority parliamentarian, he would raise the issue with the chief minister and demand arrests of all those involved in the attack. “The government has failed to protect minorities,” said former MPA Michael Javed.