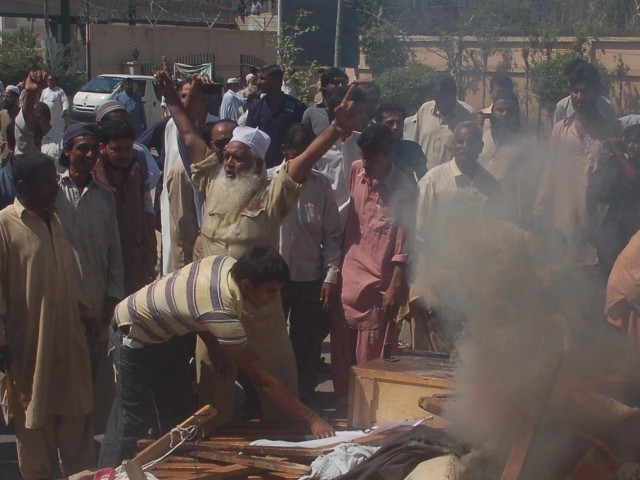 A file photo from Wednesday when a mob from the SSGC residential colony dragged out furniture from Ryan's house and set it on fire. PHOTO: FILE

On Wednesday, as police were registering an FIR for blasphemy against a teenage Christian boy, the staff at Sui Southern Gas Company were busy working on suspension orders for his mother who worked for them.

Rubina Byran, who worked as a superintendent at the SSGC’s store department was issued a suspension letter soon after her son, 16-year-old boy Ryan Stanten, was accused of sending a blasphemous text message.

Proper investigations have yet to kick off but Ryan and his family have gone into hiding, fearing for their lives. SSGC dispatched the letter to their home but no one was inside to receive it. The company has also issued a show-cause notice for Rubina, said an SSGC official who did not want to be named. But he refused to specify what exactly Rubina has been asked to show cause for or explain. It is not clear if the show-cause notice is related to the charges against her son.

Ryan has been charged under the blasphemy law or Section 295-C of the Pakistan Penal Code, for sending blasphemous text messages to his friends and residents living in the SSGC staff colony off University Road. On Friday, security guards inside the neat but well-guarded colony would not let any outside go near Ryan’s house or meet his friends or neighbors. The cleric of the colony’s mosque, Maulvi Ghulam Qadir, to whom the matter was initially referred, was not available for comment. His subordinates said he had left the area.

SSGC employee Khurshid Alam, who filed the case with the police and claimed to be one of the recipients of the messages, made several excuses to avoid being interviewed.

The only person from the colony willing to be interviewed was Altaf Abbasi, a labor union representative, who was present in his office near the security room. He said that he had not seen the text messages himself but had heard from people that the cleric had seen them. “The cleric held talks with the boy’s family on Tuesday night when the text messages had circulated,” he told The Express Tribune on Friday. “But we did not see the text messages.” No one from his colleagues knew what the conversation was about because that very night, Rubina, her two children and physically challenged husband left their home.

The next day, protestors loaded a Suzuki van with furniture and electric appliances from Rubina’s house after breaking in, and set them on fire on the main road outside the staff colony. None of them were booked for the violence. Police at the Mobina police station where the case was lodged said, “How can we arrest a mob for they are the ones who are among the complainants.”

For every vehicle carrying or taking away goods from the staff colony, a gate pass is issued at the entrance. But for this Suzuki pickup, which transported furniture and appliances from Rubina’s house to the main road before they were burnt, no such record was found in the security guards’ register. “Ask the management why wasn’t a gate pass made for this vehicle,” said Barkat Ali, a guard.

Labour rep Abbasi said that the SSGC management was making sure that the police arrests the accused, no matter where he is in Pakistan. On the other hand, Christian activists told The Express Tribune that Ryan is safe. They said that he was innocent and the messages were sent from his phone by his friends. “His friends had taken away his cell phone and they sent messages. Ryan had no idea who the messages were sent to and what kind of messages they were.” Mobina Town Investigation Officer Maula Buksh said that the police has requested the FIA to put Ryan and his family’s names on the Exit Control List to prevent them from leaving the country. The police said that they believed he sent the messages “deliberately” so that he and his family could “seek asylum in some other country”.