Malala was the voice which made us consid­er that indeed there can be resist­ance to all forms of tyrann­y.
By Feryal Gauhar
Published: October 10, 2012
Tweet Email 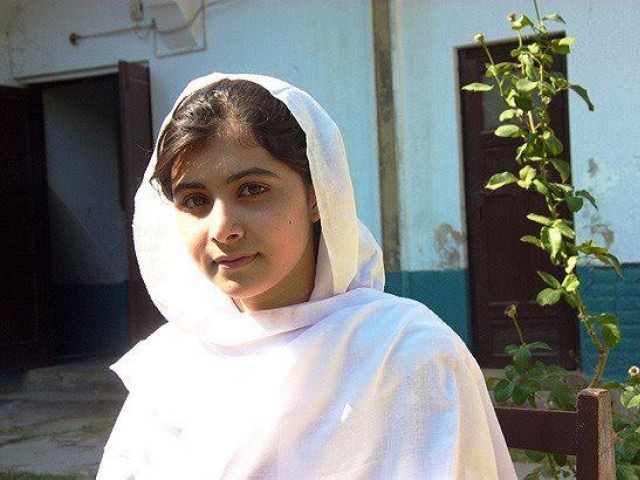 Malala was the voice which made us consider that indeed there can be resistance to all forms of tyranny. PHOTO: PUBLICITY

I hold in my hands the soft pashmina shawl which she had draped around my shoulders on a cold February day in Swat, while smiling at me with an assurance only the brave can exude. A young girl with startling brown eyes and a voice which banished any sense of despair that had wrapped itself around the shattered landscape of a paradise almost lost, Malala Yousafzai stood confidently, and spoke clearly and calmly of the need to move towards the path of progress where all citizens were afforded the opportunity of education.

Indeed, Malala had been willing to pay a heavy price for her struggle to ensure that the education of girls in Swat did not suffer despite the violence inflicted upon the people of Swat – their schools blown up, men and women publicly executed, businesses  destroyed, homes demolished – a valley torn asunder by hatred and extreme myopia.

Malala was the lone voice in that wilderness; hers was the voice which made us consider that indeed, there can be alternatives, and there can be resistance to all forms of tyranny.

Today, the attempt to silence that voice shall only make her stronger; the blood stains on her school uniform shall only feed the conviction that as long as there is breath and life, there shall be struggle.

An adolescent girl, veiled in white, her feet shod in the standard issue black pumps of public schools, Malala rose to heights few of us can aspire to.

Her diary, published on the BBC Urdu service website, testifies to the fact that all is not lost, that there are still amongst us those who can stare the enemy in the eye and resist the brute force with which all things rational and sane have been threatened.

In March, a month after meeting Malala, I was expecting her to receive special recognition for her courage, at a large gathering of men and women from the Federally Administered Tribal Areas – young people whose lives have also been torn apart by militancy.

Malala failed to turn up. Her father, a schoolteacher and her mentor, explained to me that she had received threats from extremists and it was advised that Malala should not attend a public assembly where she and others gathering there could become targets for the enemies of this state and its people.

At that point I did not think that the threat would involve a cowardly attack on a bus full of school girls.

But how else do these forces of hatred operate? They stalk the ones who dare; they silence their words; they cripple every limb, paralysing the life force which struggles to breathe in an increasingly fractured, injured environment.

Who are these men who hate the idea of progress, the thought of education and emancipation for women, so much; the ones who have crept into the vacuum created by an unresponsive, irresponsible, predator state; the ones who have slid through the cracks in our sense of self and created a monster sired by ignorance and obscurantism?

They are among us, just like Malala whose blood soaks the broken earth of our beloved, blighted homeland.