Raaz 3 is a raaz I wish Vikram Bhatt had kept to himsel­f.
By Ayesha Arif
Published: October 2, 2012
Tweet Email 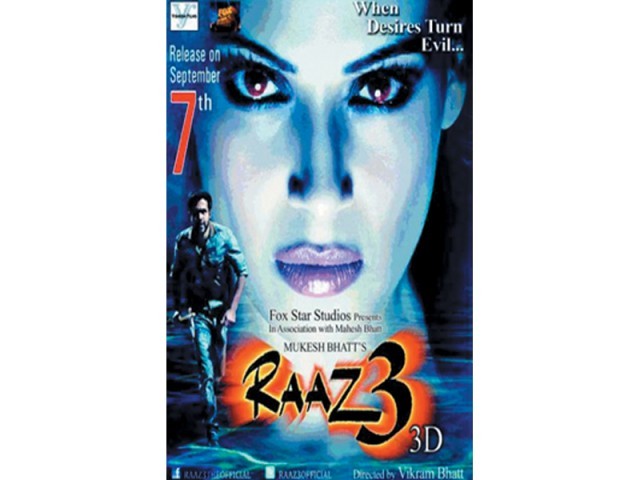 The film’s plot is filled with clichés. Among the most disturbing clichés that Raaz 3 reinforces is regarding the innate negativity of women; the other adage that women themselves are their biggest enemies becomes true after considering the fact that a female writer has written the story of this film that so unabashedly berates women.

Don’t be surprised if shots and even complete scenes in Raaz 3 look a bit too familiar. It’s not you, it’s Vikram Bhatt who has copied, or as the Bhatt’s would say “been inspired by”, entire scenes from films like Arachnophobia, It, Final Destination and The Ring.

The concept of Raaz 3 is also “inspired by” or rather is an “Indianised version” of a whole bunch of other films (read All about Eve, Poltergeist, etc). Basically, Vikram Bhatt takes a bit of this and a bit of that and churns out a whole lot of crap.

The 3D effects could’ve been good had they not been so over the top. Vikram Bhatt is like a little kid showing off his 3D technology: “Look, I’m making Emraan Hashmi pop out. Look, Bipasha Basu is popping out (pun intended) too, and look I can even make a lamp-post pop out. Anything else you’d want me to pop out?” Really Vikram, that was so not needed. An overdose of 3D cannot make a bad film good, when will you learn that?

Two words on the choreography: outrageously ridiculous. The choreography is so bad it makes you wonder if there might be a deeper meaning to the silly hand gestures being performed. The music of the film, as we already know, is also “inspired” big time from existing music. I wonder if the Bhatts believe that music, like stories, is also of seven main types, hence every song must be inspired from another song.

Not everything in Raaz 3 is terrible. Well, let me rephrase that: Bipasha Basu is hot and that, my friends, is not a terrible thing. She fits perfectly in the part of a fading starlet (I wonder why?). Emraan Hashmi is Emraan Hashmi, need I say more? He does however, look, much more attractive than his usual self. The only good thing about Esha Gupta is that she looks like a younger, prettier version of Lara Dutta. Acting? She knows nothing about that.

On the whole, Raaz 3 is a raaz I wish Vikram Bhatt had kept to himself.

Copy this: When others steal your ideas