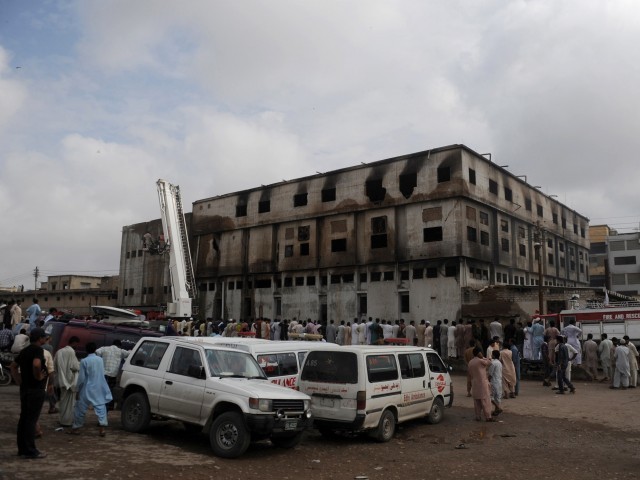 One of the suspects had repeatedly called the factory owners the day of the fire. PHOTO: AFP/FILE

After pulling the data from the cell phones of the Baldia factory owners, the law enforcement agencies arrested more than 10 people in Baldia Town in connection with the fire at the garment factory.

The detainees, reportedly affiliated with a political party, were taken to an undisclosed location for questioning. According to sources, the suspects had business ties with the factory owners but were not on good terms with them.

Sources added that all suspects belong to one family and one of them had repeatedly called the factory owners the day of the fire. The investigating teams have been unable to confirm the reason of the fire at the Baldia factory which broke out on September 11 and killed 258 workers. The investigation team, headed by CID DIG Manzoor Mughal, claims that the fire took place because of a short circuit while the FIA team says the electric cable is intact. Meanwhile, DNA samples of 39 bodies have been sent for testing and the results are expected within a few days. The bodies are being kept in the Edhi mortuary.

The investigation team has completed 18 pages of a report after recording statements of the owners, Abdul Aziz Bhaila and his sons Arshad Bhaila and Shahid Bhaila. An official of the team said the three owners, who were interrogated separately, gave contradicting statements.

The police have reportedly seized important factory records from the house of the General Manager, Mansoor, and are also looking into the reported missing equipment from the factory.