Call for accoun­tabili­ty for those killed in the twin fires.
By Our Correspondent
Published: September 15, 2012
Tweet Email 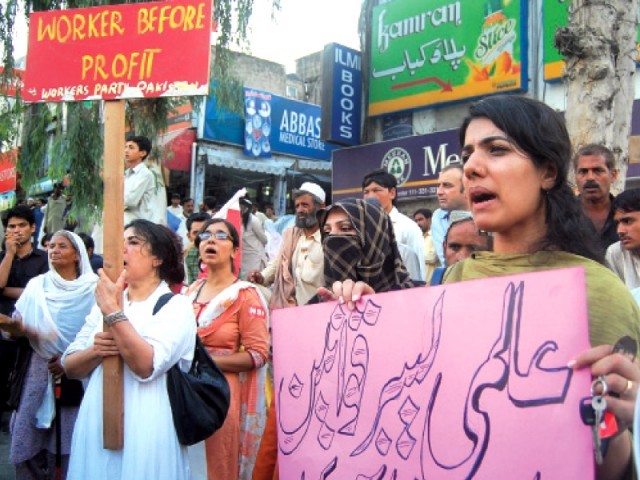 Protesters vowed to continue their efforts for safety of workers. PHOTO: THE EXPRESS TRIBUNE

Following the tragic fires in Karachi and Lahore that killed nearly 300 workers this week, a much-need demand for workers’ safety came from leftist parties on Friday.

Scores of political activists, trade unionists and students held a demonstration led by Workers’ Party Pakistan (WPP), Awami Party Pakistan (APP) and Labour Party Pakistan (LPP), and slammed anti-workers policies that were going unchecked due to apathy on the part of the government.
They demanded accountability for those killed in the twin fires.

“The fight for rights will continue as long as people will remain deprived,” was the slogan that echoed at Aabpara Chowk, where demonstration was held without any traffic disruptions.

“Preventable disasters such as these reflect a lack of political will to protect the basic rights of the working class,” said Aasim Sajjad of the WPP.

He said that all the gains of trade union movement to improve wages and working conditions for workers after decades of struggle have been repealed in recent years at the insistence of Pakistan’s creditors, who demand establishment of an “investment-friendly” business environment.

“We demand owners to immediately put their factories in order and make them safe with all necessary emergency equipment or else we will put a seige to such factories,” said Nasir.

He added that both the factories in Lahore and Karachi were unregistered and majority of workers there were denied basic rights, such as social security, minimum wage and acceptable working hours.

Nisar Shah of the LPP said that ordinary people all over the world are becoming more aware of the unsustainable and inhumane nature of the capitalist system, yet political elites remain committed to the interests of capitalists.

Other speakers included Alia Amirali of the National Students Federation, Moazzam Shah of the Postal Workers Union, Mohammad Ijaz of the Radio Pakistan Labour Union and Zahoor Awan of the Pakistan Workers Confederation.