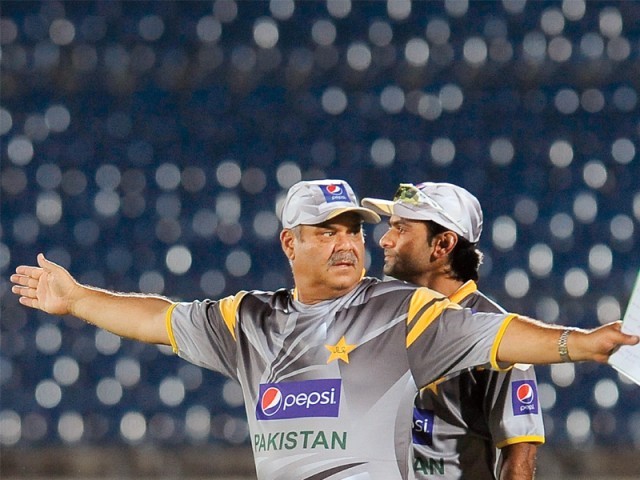 Whatmore, according to an official close to the team management, is unhappy over the appointment of Miandad as a batting consultant. PHOTO: AFP

The appointment of Javed Miandad as a batting consultant – albeit a temporary one – by the Pakistan Cricket Board (PCB) to work alongside head coach Dav Whatmore has been questioned by various former board officials and cricketers.

Miandad, who left for Sri Lanka yesterday to help Pakistan batsmen ahead of the World Twenty20, confirmed that he was not part of the team management but was only helping out with flaws in technique. Whatmore, when appointed head coach, was also handed the additional responsibilities of a batting coach, while Julien Fountain (fielding) and Mohammad Akram (bowling) also form part of the team management.

Former PCB chief Khalid Mehmood has, however, questioned Whatmore’s role after Miandad’s appointment and termed the board’s initiative as a poor move ahead of the World Twenty20.

“It depicts a state of confusion in the PCB,” Mehmood told The Express Tribune. “First they gave all-out responsibility to Whatmore by putting faith in his abilities. Now, they’re interfering in his job. If we have separate coaches for fielding, bowling and batting then why do we need Whatmore? We weren’t short on problems and the board has created a messy situation before a major event.”

Who gets the credit?

Meanwhile, former Test cricketer and chief selector Salahuddin Ahmed echoed Mehmood’s concern saying the board has showed lack of confidence in Whatmore by asking Miandad to work with the batsmen.

“If our batsmen improve, Miandad will be the one praised and there won’t be a mention of Whatmore,” said Sallu. “This has shown that Whatmore’s role has been reduced.”

He added that the PCB was expecting a lot from Whatmore but the team’s performance under him may have led the board to cut down on his role.

“We struggled to win the Asia Cup and we should be content with the Twenty20 series-win ,which came as a result of Super Over win.”

Pakistan head coach Dav Whatmore has protested against the PCB’s decision to appoint former captain Javed Miandad as a batting consultant, according to an official close to the team management.

The official said that the coach was not happy with the board’s decision and PCB Chairman Zaka Ashraf was made aware of that in a meeting that took place in the UAE earlier this week. Whatmore argued that the board had reduced his authority by appointing Miandad without his consent. However, he said the coach has been assured that there will be no interference in his strategies.