Firefi­ghters have manage­d to contro­l fire in most parts of the buildi­ng. More dead bodies expect­ed to be pulled out.
By Web Desk
Published: September 11, 2012
Tweet Email 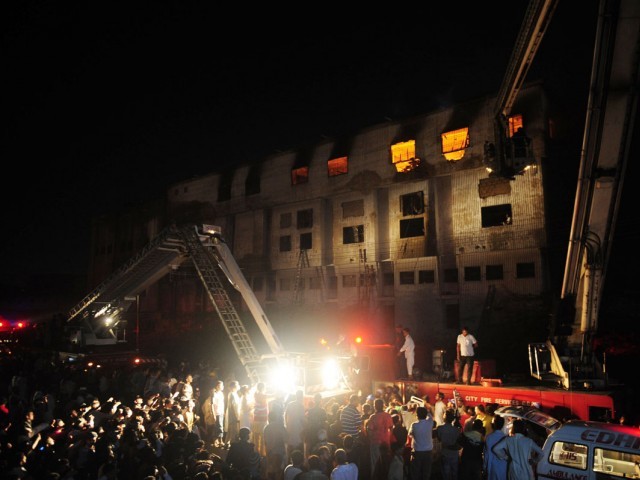 Pakistani firefighters and rescuers work to evacuate a garment factory after a fire erupted inside on September 11, 2012 in Karachi. PHOTO: AFP

KARACHI: At least 38 people, including six women and one child were killed and 17 others were  injured when a fire broke out at a garment factory on Hub River Road in Karachi, on Tuesday, Express News reported.

According to SSP West, around 100 people were trapped inside the building as fire fighters try to put out the fire.

Fire officials said that they had managed to control fire in most parts of the factory and were now trying to recover bodies of the dead from the building.

Express News correspondent Nadeem Khan said that Metropolitan Commissioner Matanat Ali Khan said that there were at least 30-35 bodies were still inside the stricture.

The fire had started between 5 and 6 pm in the evening after a short circuit. There were at least 500 workers in the garment factory at the time.

Fire officials have already declared the blaze to be of category three, the highest and most dangerous level of fire and all fire tenders in the city have been called to the site.

Chief Fire Officer Ehtishamuddin Siddiqui told The Express Tribune that some firefighters had managed to get inside the building and were trying to locate and rescue people trapped inside.

Meanwhile, firefighters said at least 25 people have been rescued so far while the injured have been shifted to the civil hospital for further treatment.

Sindh health minister has declared emergency in the civil hospital.

Commissioner Karachi has called for a case to be registered against the owners of the building.