On display: PAF makes a landing at National Art Gallery

On display: PAF makes a landing at National Art Gallery

After 15 years, the air warfar­e branch of the armed forces have arrang­ed a sneak peek of sorts into their world.
By Sehrish Ali
Published: September 11, 2012
Tweet Email 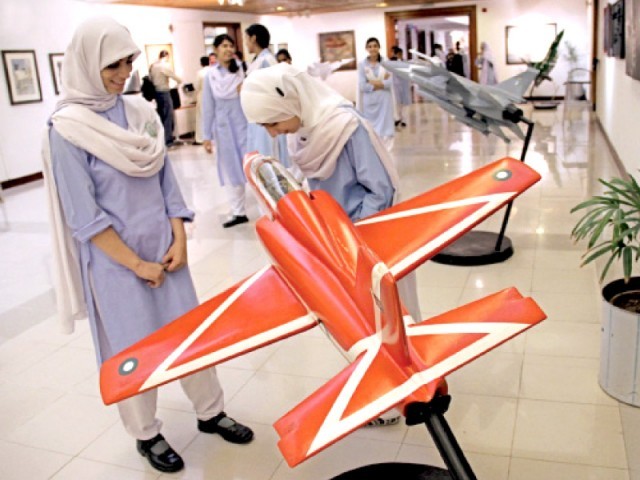 Besides the paintings and pictures, model aircraft are also on display at the exhibition. PHOTO: ONLINE/INP

To showcase the enchanting world of aviation, the Pakistan Air Force (PAF) has organised an art exhibition.

It is after a gap of 15 years, that the air warfare branch of the armed forces have arranged a sneak peek of sorts into their world.

Titled “PAF Proud Heritage through Art”, the exhibition is currently being held at the National Art Gallery of the Pakistan National Council of the Arts (PNCA).

While one many may wonder how a painting can explain the thrill of fighter planes, a visit to PNCA answers all questions.

With over 200 paintings on display, the artist, Group Captain (retd) Syed Maqsood Akhtar Hussaini, has divided his work in five segments.

The first segment, “Infancy to Independence”, consists of paintings from the 1940s, showing fighter planes landing at Chaklala Air Base, while the second segment, “Propeller to the Jet Age”, shows paintings of the Sabre Aircraft (F-104).

As you move along the wall, the paintings turn towards the war of 1965 – the third segment.

The Pathankot airstrike, the Halwara strike and the Gurdaspur strike are all depicted in this segment, giving a sense of feeling that one cannot otherwise imagine.

The war of 1971 comes next in line, showing the Tejgaon strike and Dhaka strike with pictures of fallen aircrafts on display alongside.

Moving on from the wars, one comes to the final segment, “Aerobatics and Abroad”, featuring paintings of NATO exercises in Turkey and Yom Kippur War in Egypt.

“People usually see such air formations on Defence Day, but rarely know the names of the routines, there’s a 36 air loop and a red dragon formation which are on display here,” said Group Captain Mashkoor, who is deputy director media affairs department.

For those interested in photography, the exhibition also consists of photographs of frontline fighter planes such as the F- 16 and JF-17 Thunder.

Besides the paintings and pictures, handmade aircraft models made by Squadron Leader Nadeem are also on display.

Visitors can to see models of F-7P, F-104 Starfighter, F-86 Sabre and not to mention, the Mirage.

“I’ve had a passion for fighter planes since childhood. My father would always get me toy planes because he knew that’s all I wanted. This exhibition is very informative for me,” said Ali, who was at the exhibition on a school trip.

The exhibition will continue till September 16.