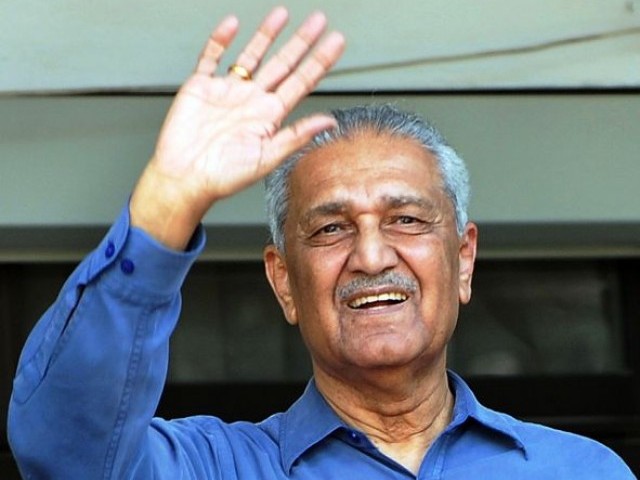 Abdul Qadeer Khan, whom many Pakistanis regard as a hero for building the Islamic world's first nuclear bomb, would not be a candidate for any public office and would guide the movement as its chairman. PHOTO: FILE

ISLAMABAD: The father of Pakistan’s nuclear bomb is launching a 100-day campaign to end corruption and urges voters to elect “clean and honest” candidates in polls next year, a senior party official said Monday.

Abdul Qadeer Khan, whom many Pakistanis regard as a hero for building the Islamic world’s first nuclear bomb, would not be a candidate for any public office and would guide the movement as its chairman, Zaman said.

Zaman said from Tuesday Khan would kick off his 100-day campaign during which he will address bar associations, universities students, chambers of commerce and industries across Pakistan.

The starting point would be the town of Kahuta, which is home to Pakistan’s nuclear facilities near the capital Islamabad, where Khan will address the local bar association, Zaman said.

Khan’s party is critical of the current government and all political parties who have remained in power for their “corruption and misrule”, he said, adding that “new people will be given an opportunity to contest elections”.

“We urge the Pakistanis, particularly youth, to elect clean and honest people in coming elections, because the parties who are in power now or were in the past are responsible for the mess in which Pakistan is today, Zaman said.

He said that the SPM “most likely will make an alliance with right-wing parties because they also believe that doctor Khan can turn around things in Pakistan”.

Zaman said Khan had started the movement after seeing the “deteriorating economic and political situation due to corruption and bad governance in the country with an aim to turn around it”.

“We are getting tremendous response through social media and more than two million people have contacted us by email, SMS, fax, surface mail to join our movement,” Zaman said.

Khan admitted in 2004 that he ran a nuclear black-market selling secrets to Iran, Libya and North Korea. But he later retracted his remarks and in 2009 was freed from house arrest, although he was asked to keep a low profile.