Devri jo Daro or mound of the top is locate­d around 17 kilome­tres away from Matli.
By Z Ali
Published: September 1, 2012
Tweet Email 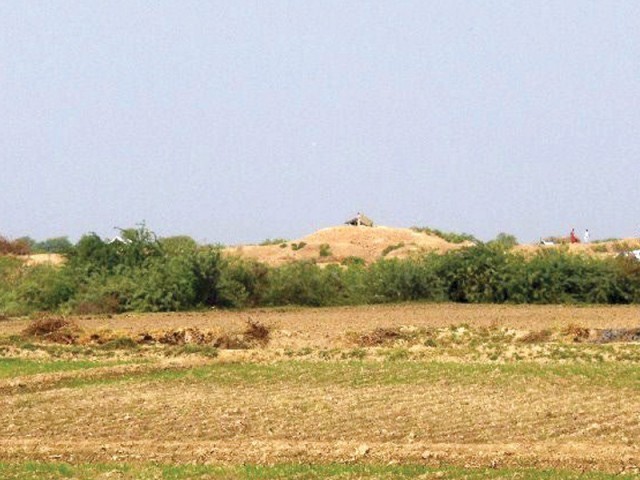 Devri jo Daro or mound of the top is located around 17 kilometres away from Matli taluka and coins with Arabic inscriptions have been found here. It is believed to date to the Mughal era. PHOTO: EXPRESS

Bagrani villagers rejoiced on Friday as a Badin court convicted 65 men for illegally occupying an archaeological site believed to date to the Mughal era.

Devri jo Daro or mound of the top, is located around 17 kilometers away from Matli taluka and coins with Arabic inscriptions have been found here.

On Friday, first additional district and sessions judge Muhammad Hassan Jakhro sentenced 65 Nizamani men to five years in jail and fined them Rs50,000 each. If they fail to pay they will undergo another six months in jail. The police took them into custody and trotted them off to Central Prison, Hyderabad.

The historic judgement wraps up nearly a year of agitation by the villagers. The site’s illegal occupation began after the monsoon rains in 2011, according to the Bagranis who have been inhabiting nearby villages for about a century. They began an organised campaign to try to get the government’s attention with the help of a slew of letters written by Advocate Irfan Ali Talpur.

“We have been campaigning for over ten months to have the land vacated,” a triumphant Talpur told The Express Tribune. He inundated the culture and antiquities departments and district administration with correspondence. The drive was close to his heart as his ancestors had lived in the Bagrani villages.

The Nizamanis began to settle there by pretending to be flood-displaced people. “Before long they brought in armed men, set up pickets and prevented our villagers from entering the area,” said Sattar Bagrani, a resident of Haji Khamiso Bagrani village. “Our elders had been living near to it for a very long time but they never encroached on this piece of land. But the Nizamanis were even using tractors to level it.” The mud mound is 25 to 60 feet higher than the surrounding areas.

According to advocate Talpur, the Nizamanis belong to Ghailpur village but mostly sent their men, excluding a few families, to live on the encroached land. He maintained that the occupation had created a law and order situation because the Nizamanis did not allow anyone near the place.

This fact was confirmed by Archaeology Director Qasim Ali Qasim, who sent a staffer to assess what was going on. In December he pitched in by telling the deputy commissioner that a group of men were eying the land that was protected heritage. There were additional problems as the culture department couldn’t start exploration and excavation because of the squatters.

“We have learnt that the people are digging the land to erect tents. And, we were apprehensive that they might also get away with the archaeological findings,” Qasim said. The armed men resisted intervention and the archaeology officers were forced to return.

When none of this worked, the assistant commissioner filed a petition in the district and sessions court which resulted in the convictions.

For their part, the Nizamanis claim that they have been living there for last 15 to 20 years. They even claimed in court that they filed a lawsuit in a civil court to obtain ownership of the land. The judge noted, however, that they had failed to produce any evidence from any authority or court to corroborate their claims. “The accused have forcibly occupied the place. Their possession over Daro Joonach/Devri Jo Daro is illegal,” the judgment read.

In the hearings preceding the conviction, Judge Soomro ordered two separate inquiries which were conducted by Mukhtiarkar Muhammad Ali Khwaja and Tando Ghulam Ali SHO Salahuddin Rustamani. Both reports implicated the Nizamanis. They mentioned that the site was vacant before the monsoon rains of 2011.

According to Qasim, there are 130 heritage sites in Sindh where exploration and excavation work has to be begin. Devri jo Daro is one of them.