Space race, on a budget, was not how Armstrong saw it

Space race, on a budget, was not how Armstrong saw it 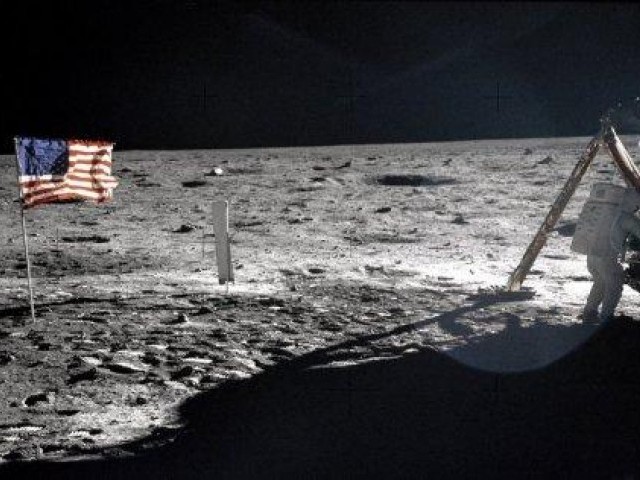 NASA image shows Astronaut Neil Armstrong, Apollo ll mission commander, next to the Lunar Module "Eagle" on the moon. The first human to set foot on the moon, Armstrong, has died following complications from cardiovascular surgery. He was 82. PHOTO: AFP/FILE

WASHINGTON: More than 40 years after Neil Armstrong landed on the moon, humans continue to push the frontiers of space exploration but missions are being tempered by costs, a trend that concerned the astronaut.

The blank check from government that financed adventures in the Cold War-era is no longer available, with today’s missions depending more on the private sector and international cooperation – often because of budget considerations.

Armstrong, who died Saturday, criticized President Barack Obama in 2010 for cost-cutting plans that, in part, retired the US space shuttles – effectively ending the American role in sending humans out of Earth’s orbit.

Now, US astronauts – whose predecessors worked feverishly to beat Russia’s efforts to the moon – ride as passengers on Russian spacecraft, and hopes for NASA’s own future manned flights to the International Space Station are pinned on private companies, which are trying to build cheaper shuttle alternatives.

Armstrong feared becoming reliant on other nations for spaceflight and that private companies would take too long to develop new space-worthy vehicles.

“I support the encouragement of the newcomers toward their goal of lower cost access to space,” Armstrong said. “But having cut my teeth in rockets more than 50 years ago, I am not confident.”

US analysts, however, say the country’s space program had no choice but to change, given new global realities.

“The world evolves, humanity evolves, our capabilities evolve. And the future of space exploration, therefore, must also evolve,” said Jeff Foust, an aerospace consultant and the editor of TheSpaceReview.com.

For one thing, flights into lower-Earth-orbit are now routine, and privatizing them allows the space agency to focus its efforts on more cutting edge missions, according the Foust.

But there are no footsteps on Mars, and many other hopes that were dreamed of when Armstrong and Apollo 11 crewmate Buzz Aldrin helped mankind make its “giant leap” in 1969 are still unrealized.

Foust said the succeed-at-any-cost mentality that drove the Apollo program to get the first person on the moon cannot be replicated.

That program “was the result of the particular geopolitical factors, that Cold War atmosphere,” Foust explained.

“We need to find different approaches that can be sustained, probably at lower funding levels than we had under Apollo, but over longer periods of time,” he added.

At the height of the moon-landing effort, NASA was allocated fully five percent of the federal budget, Launius told AFP.

For much of the 1970s and 1980s, NASA’s share stayed steady at one percent, he explained, but “today it’s less than one half of one percent of the federal budget.”

Still Launius insisted the US space program continues to make important gains – not least of which was landing the Curiosity rover on Mars last month.

Over the next decade, Launius said, “we’re going to send robots literally all over the solar system. We’re doing that now. And we’re going to learn more about the Cosmos. We’re also sending robots and satellites into space to monitor the earth to understand what’s happening here.

“That’s not personal jet packs. And its not colonies on the moon. It’s not the Jetsons,” he joked, referring to a once-popular cartoon about a space-age family. “But is is very real and very important.”

These missions, however, have often failed to stoke the public’s imagination the way Apollo’s astronauts once did.

One consequence is a ricochet effect on NASA’s ability to do the bigger more ambitious projects that do inspire people, said Keith Cowing, a former NASA employee and editor at NASAwatch.com, an unaffiliated website following the agency’s activities.

“NASA needs to be able to tell its story far better than it does. If people truly understood what space exploration is about, and the promise that it offers, they’d be clamoring to triple NASA’s budget,” he said.

Barring that, Foust said international cooperation and private sector gains will allow greater achievements all around.

“International partnerships” – like the ones behind the International Space Station – “give us the tool to do things that would be more difficult or impossible for individual nations to do,” he said.

Such a model will likely form the basis of future human space exploration, “particularly the really big and expensive missions like sending people to Mars.”