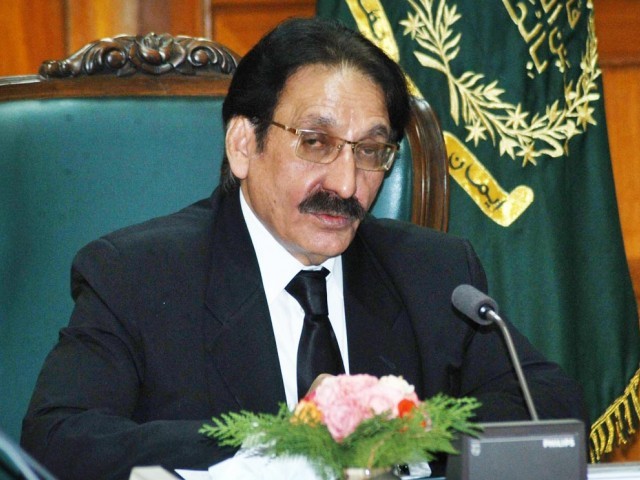 SUKKUR: Legal experts discussed key themes at a law conference held in Sukkur this weekend and looked at the courts’ performance.

The conference, which was presided over by Supreme Court Chief Justice Iftikhar Mohammad Chaudhry, featured a number of judges from the Supreme Court and Sindh High Court, members of various bar associations and lawyers.

After the chief justice’s address, three groups were formed to debate themes such as the role of judiciary in good governance, law education and how an independent bar is imperative for the judiciary’s independence.

The discussion about the role of the judiciary in good governance was presided over by Sindh High Court‘s Justice Maqbool Baqar. Prominent lawyer and former law minister Abdul Hafeez Pirzada, Dr Farogh Naseem, Advocate Mukesh Kumar and others read papers.

Abdul Hafeez Pirzada said that the Supreme Court is busy is hearing political cases such as the one dealing with the National Reconciliation Ordinance which is why other cases have been pending.

He urged the Supreme Court to divert its attention to cases that are meant for providing relief to citizens. Referring to the 18th amendment to the constitution, he said it has not been implemented in letter and spirit as yet. According to the 18th amendment, the federation was to transfer some of the ministries to the provinces. While some of these have been transferred, they were not given funds and so the provinces were short of money to run these. Pirzada urged the Supreme Court to provide guidelines to the federal government so that this issue could be addressed.

A discussion on legal education was presided over by Supreme Court Justice Anwar Zaheer Jamali. Among the speakers was Sindh Assistant Advocate General Imtiaz Soomro.

Advocate Mukesh Kumar, who read a paper on the judiciary’s role in good governance, called on all stakeholders including the judiciary, lawyers and the government to forget what has been done in the past and start afresh. He said we have to keep our differences aside to make Pakistan strong and self-sufficient. Kumar said the situation worsens when the judiciary involves itself in politics. Every institution must stay within the boundaries defined by the constitution, he added. Kumar also called for the accountability of judges like government officials.

The third discussion under the theme ‘Independent bar is imperative for the independence of the judiciary’ was presided over by the Chief Justice of the Federal Shariah Court Agha Rafiq Ahmed Khan.

Hadi Bux Bhatt, the president of the District Bar Association Sukkur, read a paper on the theme. According to Bhatt, the task of interpreting the law is given to the courts. To ensure that the courts do not become an instrument for the government to impose its own preferred interpretations and applications, the courts must have professional expertise in law and must be in a position to make their decisions impartially.

According to him, the working of the judicial system depends on the bar in fundamental ways as judges come from the bar. He said the courts depend on the counsels to present cases so that the courts can form the best view of the law as it applies to the cases at hand. The courts must be able to rely on the professional expertise of the bar and on the counsel’s understandings of their responsibilities to the court as officers of the court, he remarked.

A meeting of all three groups was held under Sindh High Court Chief Justice Mushir Alam and all the suggestions and recommendations were finalised.

Unfit for consumption: Poisonous alcohol claims over a dozen lives