The two countr­ies are discus­sing a slew of propos­als to find a soluti­on to the CIA-led drones.
By Kamran Yousaf
Published: August 25, 2012
Tweet Email 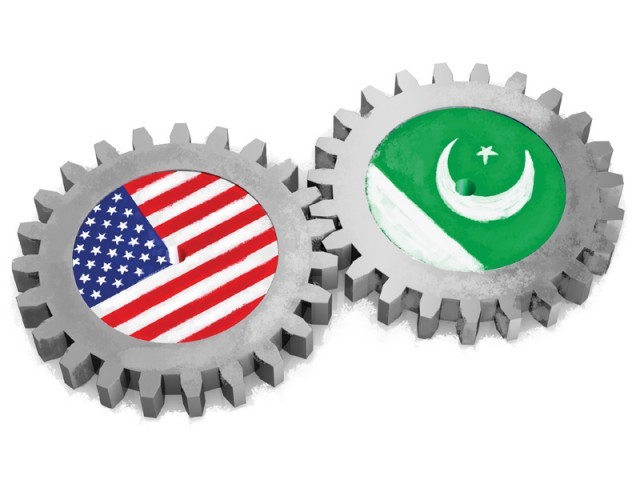 Foreign office spokesperson Moazzam Ali Khan said Islamabad had other options available to convince the US administration into ceasing unilateral strikes on Pakistani territory. At the moment, the government is trying to resolve the issue at a bilateral level. DESIGN: JAMAL KHURSHID

Pakistan has said that it hopes to cut a “mutually acceptable” deal with the United States on its contentious drone campaign in the tribal belt.

The two countries are discussing a slew of proposals to find a solution to the CIA-led campaign, which has been a major irritant in their troubled diplomatic relations.

“We hope to come up with a mutually acceptable solution to this issue,” Foreign Office spokesperson Moazzam Ali Khan told a weekly press briefing in Islamabad on Friday. He did not elaborate.

Khan’s statement came a day after the Foreign Office summoned a senior US diplomat to protest the recent surge in drone attacks.

In the past, Pakistan offered to carry out surgical strikes against “high-value” targets using its F-16 fighter jets as an alternative to drone strikes.

The United States showed little interest in the offer, mainly due to a trust deficit between the two countries and their intelligence agencies.

When asked, Khan said Islamabad had other options available to convince the US administration into ceasing unilateral strikes on Pakistani territory. At the moment, the government is trying to resolve the issue at a bilateral level.

The US appears to have no immediate plans to cease drone strikes, as it considers the campaign crucial for eliminating high-profile al Qaeda and Taliban militants.

Responding to a question regarding former ambassador Hussain Haqqani’s comments at a Washington think tank on Thursday, the spokesperson differed with the assessment that Pakistan and the US should “stop pretending they are allies and amicably divorce”.

“We think there is a desire on both sides to have this relationship moved forward on the basis of mutual respect and mutual interest,” he added.

The spokesperson rejected India’s allegations that Pakistan was using social media to stoke communal tension in the volatile region of Assam.

“We reject such insinuations and we find them baseless and unfounded. We have asked them that if they have any credible information … they are most welcome to share it with us,” he said.