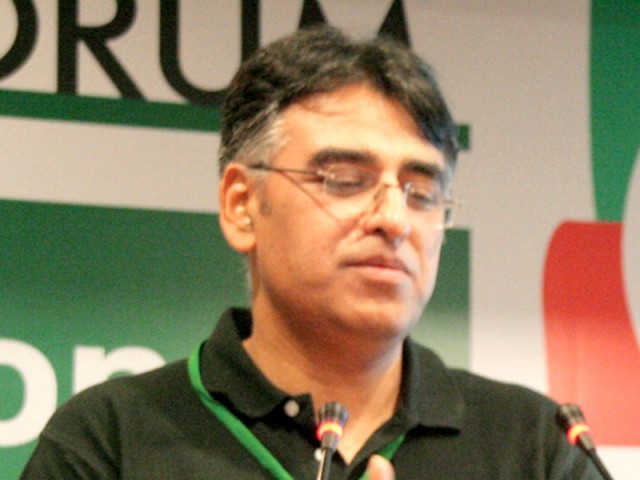 Imran Khan, as prime minister, will devolve power from his hands down to grass-root level, says Asad Umar. PHOTO: FILE

Pakistan Tehreek-i-Insaf (PTI) announced its Economic Policy Vision on Friday in which it listed down health and education as priorities among reforms in governance and revenue collection.

PTI’s Senior Vice-President Asad Umar, before presenting the policy, gave an insight into the current situation of Pakistan.

While comparing the growth of Pakistan to that of other countries, Umar said, “Pakistan’s solution is not administrative, it is political.”

He added that the cost of economic failure in Pakistan is of human life. “A child born in Pakistan has a lower chance of survival than in most countries of the world.”

While presenting the policy, Umar maintained that all state-owned institutions are at a disaster and the loss is so huge that it cannot be estimated.

To reform the institutions, Umar said that the Railway Ministry will be abolished and it will work under an autonomous board instead of the government. He added that the Pakistan International Airlines (PIA) will also be taken out of the control of the Ministry of Defence if PTI chief Imran Khan comes into power after the next elections.

Stressing the need for a local government system in Pakistan, Umar said that the current governance in the country is very centralised and weak. “Imran Khan, as the prime minister, will devolve all power from his hands down to the grass-root, village level to decentralise power.”

He added that there should be district finance commissions so that every district in Pakistan gets its due share of expenditure.

A few other points for governance reforms included:

Umar said that the party will aim to reduce the number of federal ministries to 17 from the current 37 to cut down the expenditure of the government.

–          All state institutions, including defence to participate in expenditure reduction campaign

–          No development funds for parliamentarians

“On the right hand, Imran Khan will be taking his oath as the prime minister, while on the left hand, such (lavish) buildings will be bulldozed,” said Umar.

Presenting the party’s policies for the collection of revenue in Pakistan, Umar said that the tax rates, especially the GST, is very high and it should be reduced.

He added that some time will have to be given to the tax evaders to come clean.

A few other points included:

The party vice-president stated that during the party’s tenure, health spending will be increased from 0.86% of the GDP to 2.6% in a span five years, and primary health care to the poor people of Pakistan will also be ensured.

All DHQ/THQ hospitals will be modernised and jobs will be created in the health sector, Umar detailed.

Maintaining that the country cannot progress in any sector nor can justice be attained unless education is reformed in the country, Umar said, “We want one education system for one nation.”

The PTI will also focus on girls education by doubling the number of girls high schools in five years, as there is “no better investment in Pakistan than to invest in girls education,” he said.

“It is not possible that Imran Khan becomes the prime minister and nothing is done about sports… These days, there is no productive activity available for children,” said Umar adding that the PTI will focus on sports and extra-curricular activities in educational institutes.

“Education does not only teach functional skills, but also builds up character… We want to provide the opportunity to every child to become a future leader.”

A few other points from the presentation are listed below:

–          Give confidence to overseas Pakistanis to invest at home

–          Community Dairy Farming in every village of Pakistan