Not your regular doodh patti: Brothers bring a taste of Southeast Asia

Not your regular doodh patti: Brothers bring a taste of Southeast Asia

The bubble tea is made with milk- or tea-based tea and small tapioc­a balls.
By Our Correspondent
Published: August 23, 2012
Tweet Email 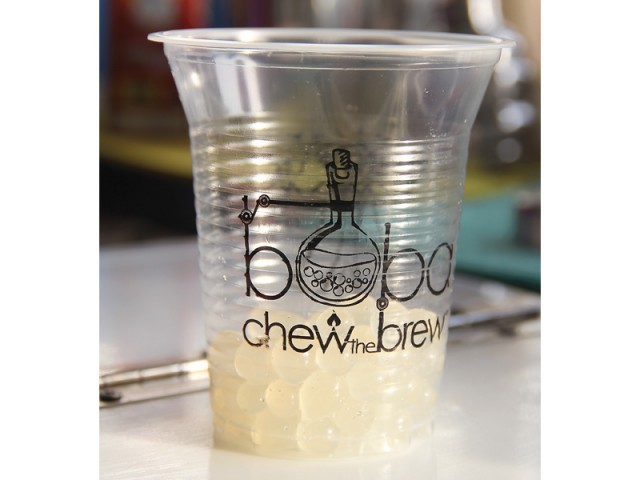 Originally a Taiwanese drink that is hugely popular in Southeast Asia, the tea consists of small tapioca balls and is either offered as milk or fruit-based tea. Starting prices range from Rs175 to Rs200. PHOTO: EXPRESS

KARACHI: Getting past the turnstile into Agha’s Supermarket with the de rigeur battleship handbag and lawn shirt starched into a tent has always been a bit of a challenge for Karachi’s socialites, but the crush at the door over the past few weeks has been over Boba rather than the new Birkin.

The latest trend to hit Karachi – after many seasons of decorated cupcakes and frozen yoghurt – is bubble tea, now available at a kiosk at the much-frequented Clifton supermarket.

“We are the only shop in the country that offers bubble tea,” says the 26-year-old owner of Boba, Saiem Nasir, who moved back to Pakistan last December. He opened the stall with his younger brother Saad.

The iced bubble tea, originally a Taiwanese drink that is hugely popular in Southeast Asia, is sold in a number of flavours. The beverage consists of small tapioca balls, which are offered in either milk or fruit-based tea.

Since they opened on the first day of Ramazan, Nasir says Boba has been lapped up. They get about 150 orders a day and people are willing to queue for up to 40 minutes.

All the ingredients, from the tea to the thick straws, are imported. The most popular flavours are Lychee green tea and honeydew milk tea. Prices start at Rs175.

The shop’s specialty is the popping boba which is made of fruit syrup and seaweed extract. The vibrant bubbles dissolve in your mouth after the fruity juice is released like a pop. The brothers are involved in the day-to-day running of the stall, even clutching a clipboard to take orders. The hands-on philosophy works for Nasir, who studied hospitality and business management in the US, knew that this is what he wanted to do in life. The romance with bubble tea for him started in high school in California where he often heard an elderly woman calling out “Boba, boba!” around campus. The taste of the bubbles stuck with him ever since he had his first sip.

While Karachi seems to have warmed up to bubble tea, Nasir admits that he was terrified before the launch. “We had no marketing budget. We were scared about how people would find it. But the refreshing and light taste makes everyone come back for more.”

The response has been so overwhelming that they had plans to expand. According to Saad, “We want boba to be all over Pakistan!”